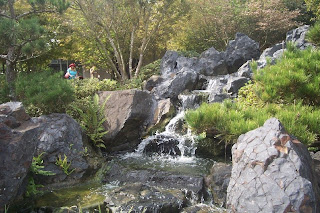 Japanese Garden Gosford NSW
WATERY WEDNESDAY
RE-CREATION
When one thinks of Australia, babbling brooks don't come to mind;
That's not to say they don't exist but they're rather hard to find.
And the waterfalls are often dry; one couldn't say they gush!
The water doesn't surge a lot, or splash down in a rush.
This is the dryest continent on earth, so we are told.
Even on our lush East Coast, water is like gold.
So for pleasant falls of water we must thank the Japanese
Who build us lovely gardens, using their expertise.
Many towns have a Japanese Garden; many gardens have waterfalls.
A lovely change from the buildings and the busy shopping malls.
*
----------------------------------------------------------

Thanks Brenda, love your work.
I'm an old kid who still loves her buttery toast and vegemite !

The sound of Water gushing is universally loved by everyone.

Was a pleasure reading it.

Sound the trumpets! Wave the flags! Forget your worries! The billionth jar of Australian VEGEMITE has just rolled off the production line! Which isn't bad for a population of 20 million! We admit it's taken since 1922 to reach this milestone, but still ....
For those who don't know, Vegemite is a concoction made of vegetables and yeast. It looks like dark brown boot-polish and it packs a punch. It is certainly an aquired taste. Children weaned on it become addicted! (Those weaned on English Marmite cannot abide Vegemite and vice versa.) Australians take it overseas on holiday with them and it was a vital ingredient in the army supplies in WW2. It is as much of an icon as the Opera House! So congratulations Vegemite!
I wrote the following as a song for children many years ago. Now I've altered the final line of each stanza to suggest that Vegemite might cure all our ills (Credit Crunch included!).