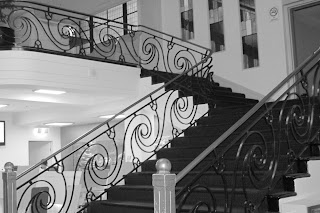 ANY MINUTE NOW
Any minute now Scarlett O'Hara will appear
Standing in a crinoline on the very topmost stair,
And she'll walk down very slowly holding her skirts just so,
And Rhett Butler will be waiting, standing there.
We know it's going to end in tears for it does so all the time;
Down the decades on the screen they've acted so.
But we always hope that this time he will take her in his arms!
And he wont turn on his heel and simply go.
But 'I don't give a damn!' he'll say, with a look of utter scorn;
He's said those words so many times before.
And she'll look with disbelief as he declares that he is through,
And she sees him stride away from her front door.
What a silly, flighty girl she was, though pretty as a rose;
She was heartless and she gave herself such airs,
But she's always in my mind, standing on the topmost step,
Whenever I see a lovely flight of stairs.
*
------------------------------------------------------------------------------- 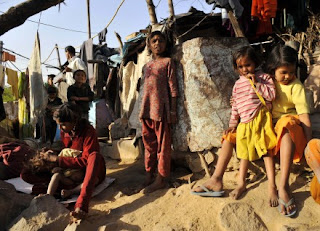 COMMON WEALTH?
(I don't think so)
How can we count our medals when these people are displaced?
They are people who live in Delhi, where the Commonwealth Games are based.
There's something wrong with society when athletes can run races
Accepting golden medals with great smiles upon their faces,
While the poor are living homeless almost underneath their feet,
Having lost all their employment, having nothing much to eat?
The Commonwealth means 'common wealth'. What sort of joke is that?
What an awful world where many starve and the rest of us grow fat!
*
Posted by Rinkly Rimes at 6:53 AM