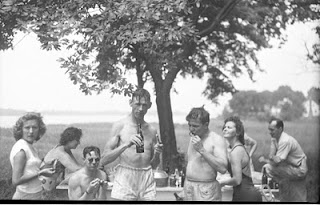 Tom worked at the grocery check-out to earn some extra cash.
And he found some customers difficult, boorish, morose or brash.
He was used to being tactful and letting such matters pass,
Though he sometimes found situations tended to verge on farce.
But he wasn't prepared for Elvira, who stood in the line one day!
For one thing she had no manners, pushing others out of the way.
Her voice was harsh and screeching, expletives she kept bawling,
Her language was from the gutter and her manners were appalling.
Two little boys were with her, one was six and one was nine;
They were squabbling and pushing and fighting in the line.
Elvira slapped them round the ears, and shouted 'Shut your face!'
All in all the family was an absolute disgrace.
At last they reached the check-out and Tom had had enough;
He knew this certain customer would make his job more tough.
'Get on with it!' Elvira cried 'I can't stand here all day!'
And that's when Tom decided on exactly what he'd say,
For he knew he must say something to even up the score.....
And so he said ' You have two boys. They must be twins for sure!'
'Twins!' yelled Elvira, spluttering, 'Are you right off your head!
Can't you see one's older! You're an idiot!' she said.
'What made you say a thing like that! You're talking stupid rot!
Can't you see Brad's nine years old and Damien is not!'
Then came Tom's very pointed remark; (all right, it isn't nice!)
'I just can't believe that anyone could ever make love to you twice!'
*
Posted by Rinkly Rimes at 1:54 PM

I love it, Brenda! Glad to see you join the fun! And this is such a hoot! Just can't have any fun anymore without getting into trouble! Have a great week!

I love Tom's final remark. Not nice, but oh, so funny!

Gosh I love the way you played MF.
Very clever indeed.
Welcome to the fun!

I was wondering what they might all have been looking at. Good answer!

A snappy micro! Like a music hall skit! And Tom's story is priceless!

That made me laugh!

Love the playfulness deviousness in this rhyme!!

Always love your writing, Brenda. Microfiction is fun, too.

Loved your little rhyme!Have a great week ahead. Cheers!

Brenda,
I have been so enjoying your poetry! Love Tom's answer (though not so nice! LOL!)
Your MM is very well done - love the rhyme!