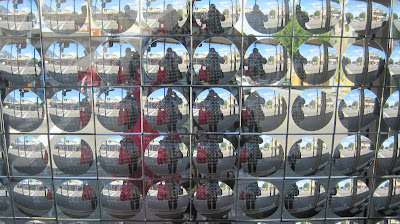 SPICE OF LIFE!
If variety's the Spice of Life
You certainly have it here!
A display in a little shop window,
Each picture a perfect sphere!
And there am I, with my shopping-bag,
Repeated again and again,
Sometimes recognisable
And sometimes not so plain.
I find it fascinating
That each picture that we see
Is just a little bit different
From the next, but not totally.
And over it all looms the shapeless ghost
Of the lady going 'Click!'.
Now here's a little question.....
Which 'me' would you pick?
* 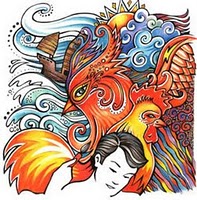 *
THE MAGIC PAINTBRUSH
Now Ma Liang was a kindly boy; he helped his fellow-man.
He said 'If anyone's in need I'll do the best I can.
I'll tend your goats; I'll plant your rice; I'll sow your springtime seeds.
For I love helping people and tending to their needs.'
The people clapped and cheered Ma Liang; they thought he was a gem,
And, sure enough, he did his best to bring good cheer to them.
One night he had the strangest dream, that was hard to understand;
He dreamed a ghost came up to him with a paintbrush in his hand
Saying 'Take this brush and paint with it! Try it and you will see
That you have been rewarded for your generosity'.
When Ma Liang woke he found the brush was lying by his side.
He looked at it in terror; his eyes were opened wide.
That very day a neighbour came; he was carrying a cup
He'd come to borrow water for his wells had all dried up.
Ma Liang took his magic brush, and painted him a stream!
It tumbled over the dusty ground like the paintings in his dream!
The neighbour was delighted as his stream ran through the ground
And all the other villagers came up and stood around.
'I need a cow' a man cried out; 'Please paint a cow for me!'
And straightaway a cow appeared as fast as one, two, three.
'My child needs food' another said ' He's in a feeble state!'
And Ma Liang painted dinner, in a moment, on a plate.
The villagers were happy; they had all that they desired
And Ma Liang painted for them till his painting hand was tired.
Now a certain wealthy merchant heard about the magic trick
And he sent a band of robbers to Ma Liang's house double-quick.
They stole away the paint brush and gave it to their master,
Who set about him with a will, painting faster, ever faster.
He painted this, he painted that, he hoped that things would thrive
But though he painted madly nothing ever came alive!
He stormed across to Ma Liang's house and cried 'Why should I fail?
You're nothing but a trickster and I'll have you thrown in jail!'
He went to Ma Liang's prison and said 'Now! Paint for me!
I promise if you do your trick I'll see that you're set free!'
'Very well' said Ma Liang, though he recognised a liar,
'I'll paint the pictures you request, whatever you desire.'
'I want a Golden Mountain' the wealthy merchant cried.
'Paint me a Golden Mountain filled with gold inside!'
To his surprise Ma Liang agreed , with some alacrity,
But he didn't paint a mountain; he painted a bright blue sea!
The sea was wide, the sea was deep, it stretched far, far away.
The merchant then was furious, shouting 'I will make you pay!
I'll have you clapped in jail again, where you were once before!'
But then he saw the magic brush was painting something more!
On the far horizon, a glory to behold,
Ma Liang painted a mountain, a mountain of solid gold!
A mighty stretch of water, Ma Liang's painted sea,
Lay between the merchant and the mountain he could see.
'Paint me a boat!' he ordered 'And then I can set sail!
If I don't reach my mountain you'll be back again in jail!'
So Ma Liang painted a sailing ship and the merchant leapt aboard,
Heading for his mountain and its precious golden hoard.
When he had sailed a certain way Ma Liang took up his brush
And painted a quite enormous wave that rose up with a rush!
The wave engulfed the merchant; he very quickly drowned
And not one trace of the wicked man was ever to be found.
Ma Liang went back to helping folk, which is what he liked to do,
And if you ask him nicely I'm sure he'll paint for you!
*
Posted by Rinkly Rimes at 2:47 PM

Those reflections are really funny... I really enjoy the fact your own reflection doesn't look exactly the same from one to the next one...

great reflection photo! And I always enjoy your writing too.