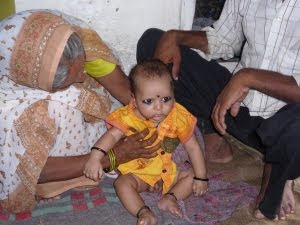 Time, which was once a wide, unbounded sea,
An ocean stretching far into a dream,
Is now down at my feet, a little stream,
The 'distant shore' now very near to me.
When, as a child, I viewed eternity,
And saw the water's brilliant colours gleam,
'Forever' was a very simple theme,
Unending time a certain destiny.
But, now, one step is all I need to take
To cross the stream and reach the other side.
How is it that Forever's shrunk so small?
That step, will it be very hard to make?
And, at the last, will Time once more seem wide?
And will I ever understand it all?
*
Posted by Rinkly Rimes at 7:00 AM

I am glad I did not live there in those days. I cannot wear mascara now as my eyes bother me too much. So happy you dropped by my place today. I would be honored and pleased if you wrote a poem about my precious great grandson and his catch. I am joining your other friends as a follower.

I forgot to mention if you should write a poem about his fishing trip, his name is Layton. Naturally, you know I must have a copy.

Cute and fun, as usual. I've tried mascara a few times at various stages of my life, but all it ever did was make look ill or unwashed!

What a terrific post for the M Day! And how fun! Interesting history about eye makeup! Hope your week is going well, Brenda!

Like your info on mascara, but love your sonnet!

Interesting. I just "did" Cleopatra, complete with mascara, a short while ago. Great minds... {-)

I think this is such an original post. Mascara never entered my mind at all. Interesting and informative.

I don't use Mascara, it always bothered my eyes and made them itch and burn. And I don't see all that well, so just gave it up. What you see is what you get. ; )

i don't use mascara either.

Ah, woman thou art vain... but been using this one too.. thanks to cleopatra... lol.

Have a nice time!
My ABC Wednesday Here

Wow, I never would have thought of mascara! Your first photo reminded me of the movie, "Babies." One of the youngsters (all under one) featured was from Africa.

Hm. I haven't thought about mascara in quite a while! A fascinating topic, indeed!

I always use mascara, otherwise I look like a ghost !
I tried Khol but it's too difficult, I prefer liquid mascara for my eyes.
Interesting post !


Gattina from the ABC team

I am forever buying new mascaras. An occasion will arise for which I need to "dress" and I can't find my mascara. I have very pale, sparse lashes and (I think) small eyes, so I seem to think I need mascara. I once tried false eyelashes, but they kept hitting the insides of my eyeglasses.
Enough about that. I love your sonnet, Brenda. Very thought-provoking.
K