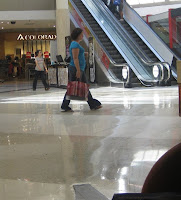 THIN ICE﻿
Life is like a skating-rink!
(Now that's a quotable thought to think!)
You think you're going to the store
To buy some groceries: nothing more!
But then, though you search very hard,
You find you've forgotten your credit card!
Then you meet that woman from down the street
Who's the very last person you'd wish to meet!
She keeps you chatting for half an hour!
She doesn't notice you're looking sour!
You find your card! Oh dear! Wrong one!
What a day! You're having fun!
You'll have to use it, come what may.
Blast! 'No funds' the other day!
Then some nasty little child
Pokes out its tongue and drives you wild.
When you visit the grocery store;
They don't stock 'your' brand any more!
You're paying cash. Now where's your list?
Any minute you'll slash a wrist!
It must be in the other purse!
Can things be getting worse and worse?
You cross the floor. It's slippery.
You trip and fall and bruise your knee!
*
On life's skating rink you sit,
Floored by the expertise of it!
Too many swirls! Too many twists!
Too many cards! Too many lists!
Life is like a skating-rink!
All you can say is 'Life! You stink!'
*
P.S. The grand finale of this visit.......
I parked the car! Damn! Damn! Damn! Where is it?
*
----------------------------------------------------------

ANOTHER QUOTE!
The life of a poor Film Extra is so fraught!
It's really ranks as quite a dangerous sport!
After one's sat around for half a day,
Knowing one's going to earn so little pay,
One is asked to express emotion right on cue,
In front of a laughing camera-man and crew!
Last week as usual I was on the set
Nice and early... well, isn't that etiquette?
There were dozens of others waiting around on hand;
We Extras are quite a large, united band.
The Director came to give us all 'the chat'.
Today he spoke to us about 'That Cat.'
Now I must make it plain to all my readers
That this film was not designed to suit cat breeders;
The film is of the 'Lassie' sort, but feline,
Hoping eager Catty types might make a bee-line
For the local cinemas where it is showing,
And reports might be encouraging and glowing.
Sentimental? Well I have to say that's certain,
Especially the weepy final curtain.
The subject of the story? Emigration;
A move to some completely different nation.
And, in a way that you'd expect, the cat
Is deserted and abandoned on the mat!
But that plucky cat (of course) makes her own way
To a country very, very far away .
She crosses forests, oceans, mountain peaks
And the journey takes her many many weeks!
Sadly, she's knocked-about by her survival,
And poor Kitty ends up dead upon arrival!
So the Director went on with his spiel....
'There's a lot of raw emotion you must feel.
You'll be crowds when she is kidnapped in the zoo,
When she sails on board a ship you'll be crew;
You'll be audience when she performs on-stage;
You'll be brutes when she is locked up in a cage.
Now you can sniff judiciously my friends
But save your tears until the story ends.
You'll be equipped with 'TEARS", a special spray,
But don't add any tears until I say!
One whiff and then your tears will soon be proving
That the drama is incalculably moving!
Cry too soon, the pathos surely will be lost!
And consider then, the awful up-front cost!
So, no spray till I give you the command.
Cry when they find the body! Understand?
Be careful how you use this special spray!
Don't squirt until the time you hear me say
The cue for you for Kitty's final bow …..
It's
'If you have 'TEARS' prepare to shed them now!'
*
Posted by Rinkly Rimes at 8:59 AM

My gosh! What a day. When I have a day like that I never know whether to laugh or cry -- I WISH I could write a poem about it. Love this -- have you thought of writing a book?

Fun post and poem, what a day! Great capture of the of the "thin ice" reflection. Have a great weekend!

Great texts, thank you for sharing them.

No Ice skating for me (too painful) but I like the reflection. :)

Brenda, I can't say which one I like better, but perhaps the first one on being on thin ice, just because it's so easy to relate to. You have a real talent for evocative stories in rhyme.

love your weekend reflections,
Hope to see you tomorrow at our Monday Poetry Potluck!
your contribution is valued.

The cleaner must be commented, there is not a speckle of dust.