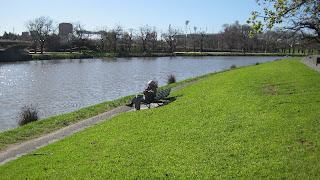 BANK ON IT!
The Yarra isn't bountiful, the Yarra isn't wide;
It's really quite industrial, with buildings on each side,
But, as it flows through Melbourne, it allows a breathing space,
A quiet little corner, a pleasant slower pace.
It's here the rowers come each day, all feathering their oars,
Sometimes in crews quite numerous, and, sometimes, only fours.
The river's lined with boat-sheds, attractive buildings too,
Each of them assigned, it seems, to one particular crew.
The Yarra isn't bountiful, the Yarra isn't large,
But it is very pleasant to sit there and re-charge.
The citizens of Melbourne are happy and give thanks
Because the Yarra River has such very pleasant banks.
* 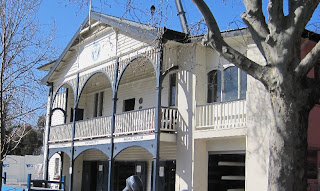 The Bogey Hole. Newcastle.
BOGEY MAN!
Today we'd call this man a jerk!
A really nasty piece of work!
A soldier with a very cruel mentality.
His victims came here on a cruise
(Without the parties and the booze)
And all they found was dastardly brutality.
His name was Major Morisset,
A name remembered even yet,
And they were Convicts mired up in his jails.
In Newcastle he had his way.
Cursed were those who had to stay
Under his thumb in old-time New South Wales.
One day, while strolling by the sea
He thought 'It would be good for me
To have a private pool that I could use.
These waves are rather high and rough
They're just not quiet and calm enough.
A pool cut in the rocks, that's what I'd choose.'
So he chose a platform made of stone
Where he could bathe and swim alone,
And the convicts came with axes and with picks.
In a line he made them stand,
With implements that came to hand,
Some made for hoeing ground or cutting bricks.
The rocks were hard, the men were weak,
And feeble was their whole technique;
But Major Morisset brooked no denial.
He had men whipped when they were slow;
The hole began to spread and grow,
He saw that he would soon relax in style.
And now we see this crystal pool
Looking inviting, deep and cool,
And we view it as a touristy attraction.
Forgetting that men toiled and bled,
And many of them dropped down dead,
Just to give one tyrant satisfaction.
It's known now as The Bogey Hole
Memorial to many a soul
Who suffered under Major Morisset.
Those convicts live in memory
Here, in our city by the sea.
We owe them all a deep and lasting debt.
*
Posted by Rinkly Rimes at 5:53 AM

I could sit on the bench on the first image for a whole day.

Great poems! You are so very talented,

Omygosh...I am so so glad to find you again. I lost you for the longest time. I love your blog and your poems...love the photos, too.

Great poems and great shots. Have a great WW!

You got me all relaxed and nostalgic with the Yarra and then made my insides squirm with the Bogey Hole.
Your social commentary poems are really coming of age. Congrats.

that's a refreshing plunge... love your piece... dropping by for WW.
My Watery Wednesday here

another great poems and images!