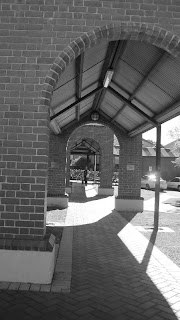 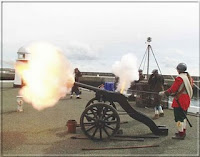 A Re-enactment
TOOTLE ROCK.
They called it 'Tootle Rock' for the words slipped off the tongue,

But it was known as Toot Hill in the days when the world was young.

A flat rock jutted out above the valley far below,

In a way that urged me to take a stone and give it a mighty throw!

I listened for the falling, and, finally came the thud,

As it landed far below me, 'plop!', down in the river's mud.

I pretended I was Icarus, though I didn't dare to fly!

I felt so poised, so elevated, free and young and high.

They told me of the legend that added to its charms;

How Oliver Cromwell came there in the days when he took up arms.

How the Roundheads perched their canon exactly where I sat,

Above the river on a rock that was firm and table-flat.

Someone showed me indentations that, surely, the canon made,

And I felt I heard the warlike cries and I saw a flash of blade!

What a way to learn of history! Even if the tale were false?
It was the 'feel' that mattered, more than any history course
* 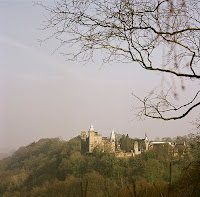 The View from Tootle Rock
*
Posted by Rinkly Rimes at 7:35 AM

I like the composition of the Country Station. Quiet.
The noise in cities is 98% too high, a lethal level to hearing eventually. I would like to alight at a quiet
station in the country like this!

I like the station poem especially and the photo. The words convey such an atmosphere of the small train station. And thanks for the small history lesson! I do like this way of learning history.