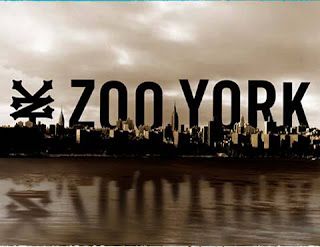 Something about zoos requested.

BACK TO NATURE!
Basil Potts came home from the office
A sad and demoralised man.
He said to his wife 'I have news, dear;
I'll break it as well as I can.
I've lost all my money, my darling,
The very last coin is spent;
I just speculated and lost it,
Right down to the very last cent.
Now I know you've rejoiced in the high-life;
We've both lived it up I agree,
But in future we'll tighten our purse-strings.
We'll manage, my sweet, just you see.
I'll get a desk job at the Co-op,
We'll manage with just one old car.
And you'll see, if we both do our bit, dear,
The money will go really far.
But we'll have to get rid of Lucinda,
You'll just have to learn how to cook.
I think you should go to the library
And borrow a cookery book.
I'm sure you'll be able to cook, dear,
If you work hard and make up your mind!
Life will be very much as before, love.
Very little will change, you will find.'
*
When his wife spoke she rather surprised him;
Her tone was quite distant and grim.....
'We can also get rid of the gardener
If you learn to make love like him!'
*
Posted by Rinkly Rimes at 11:32 AM

Chuckles! You are too good with words.

RR I never heard of Zoo York! Where is it? I think of the zoo we were at in Australia right across the bay from the opera house. Do you know what that is called? It seemed to be a strange name, LOL.

Zoo York is indeed an interesting brand name. Never heard of it either, but whoever thought it up was very clever! You're right about the human zoo. We move among the inhabitants daily.