ABC WEDNESDAY
letter 'V'.
VESTIGIALITY
All right! All right! So it's not a word,
But when I apply it to a bird
That has two wings but cannot fly
There is no earthly reason why
I cannot create something descriptive.
After all you can't be prescriptive!
A vestigial organ is one discarded,
Although once very highly regarded.
The wee-winged kiwi eventually found
He could manage well when on the ground.
There was no earthly need to fly,
So his wings just shrivelled by and by.
Likewise our appendix withered away
When we desisted from eating hay.
(I've put this in because of the rhyme;
I can't be perfect all the time!)
In fact no-one is really sure
What the appendix was actually for!
But, since a rabbit's is much bigger
It's to do with diet, or so I figure.
The coccyx used to be a tail
Until the tail began to fail
And Man descended from the trees
And created upright societies.
The human brain will vestigialise
As we become, in time, less wise.
As we gaze at computer screens,
Brain-power will no longer be in our genes.
Man will be dull as any log
And no-one will ever read my blog!
*
-----------------------------------------------------------------

PS
This year will long be remembered as the year of the Big Wet! La Nina has excelled herself; the dams are brimming and everything is growing like mad. It has rained, almost non-stop for weeks and a lot of Xmas celebrations have been affected. 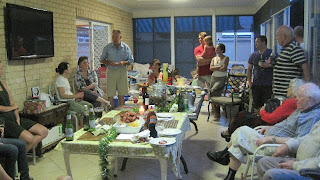 This was out Street Party, normally held out on the green between the houses. Instead, this year, a tarpaulin was erected over the barbecue and we all, young and old, met in Max's family room. 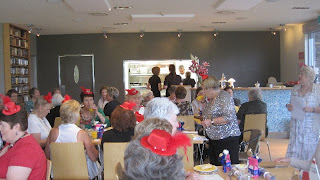 And, yesterday, we had our Probus Club party. Malcolm was roped-in to ferry two of the older members to the venue, where lack of parking is a feature, and we had a wretchedly wet time picking them up. We arrived looking like drowned rats. The lunch was splendid, though, with excellent company, food and good-will, and my little sketch was a success. 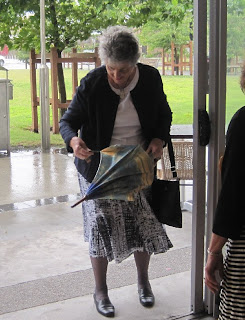 I recorded the arrival of one of the revellers!
*
Posted by Rinkly Rimes at 6:48 AM

Sufficiently appropriate to create your own word when it fits!

i make up my own words all the time