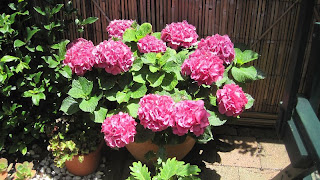 HI STRANGER!
I'm no 'Green Thumb' or flower arranger;
And this is a run-of-the-mill hydrangea.
But it's looking pretty special now
In my little garden, anyhow.
Its history is somewhat tragic
And yet this beautiful flower is magic!
For year on year and season by season
Not a flower appeared. What was the reason?
It was watered, and it was fed,
'What a dud!' I frequently said.
Throughout the summer the leaves grew strong
But not one blossom came along.
This Spring I said to my suffering spouse
' I see that hydrangea from the house!
I can't look out on an arrant failure!
Hydrangeas are rampant in Australia!
Why is ours such a boring thing?'
Those were my curt words in the Spring.
I chopped it off at a pretty low level,
But pulling the roots was the very devil.
I left those to Malcolm and he forgot
So I said, standing by the pot,
' Please get rid of this awful thing!
It's annoying me like anything!'
Days went by, no satisfaction;
Malcolm was hard to stir to action.
Then little by little, shoots appeared.
Yes! Though it may sound rather weird,
That plant had heard my plaintive wail
And had made up its mind it would not fail!
I hadn't the heart to spoil its fun
So I let it linger in the sun.
And lo! Now look at my reward!
Blossoms growing of their own accord!
So now you know why I say 'Hi Stranger!'
When I see my bountiful Hydrangea.
*
------------------------------------------------------------------------------ 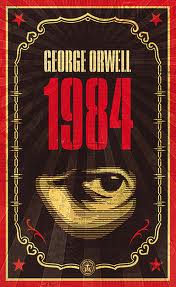 THE EYE
Not chosen for its great design, though that 'eye'  is quite un-nerving!
But for its place in history, which it, clearly, is deserving.
Remember when that future date struck terror to the soul?
Remember when Big Brother played that most decisive  role?
Through all the years preceding that, now, immortal date,
A lot of people felt the book envisaged their future fate.
It had a quite ridiculous Doomsday feel about it.
We were doomed to be spied-on; nobody could doubt it.
But as soon as the year was over, the fatal date just faded
And, if we considered it at all, I think we felt quite jaded.
Now, twenty-six years later, Big Brother seems to loom,
And, throughout society, it seems, there's a nasty taste of doom.
George Orwell was a visionary, with a great imagination.
Was he, maybe, foretelling our future situation?
*
Posted by Rinkly Rimes at 2:35 PM

When I was growing up in the Phil, my mother the avid gardener always had hydrangea. But we didn't know it's name. It went by locally as "million dollar".

Always love the prose that go along with your photographs. Would love to see that hydrangea bush in my garden, so healthy looking and such a pretty color.

I am calling by as a first time participant in Today's Flowers, love the deep pink of your hydrangea.