A cockatoo in a Xmas Bush

After two very sociable weeks, and more Christmas meals than I care to remember, the Silly Season came to a halt yesterday. We actually had another melodrama engagement on Thursday but that was very low-key at a Nursing Home, so it was more of a Good Deed than anything else. Yesterday, however, we went to a Retirement Village at a place called Booragul, where we performed 'Tiddly Pom' for possibly the last time. It was a great venue, and an ideal audience and we enjoyed a convivial lunch together. Fifteen of my group were there so it was our own celebration, in a way. Malcolm and I were very taken with the complex and may very well put our names down for it. There's a waiting list, so we wouldn't have to make any quick decisions.
Here are some shots from the occasion. 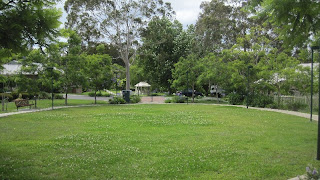 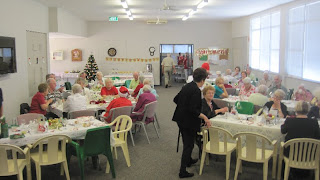 Preparing for the show. 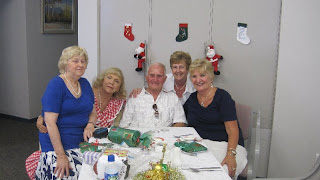 Malcolm in party mood with Shirley, Pam, Joy and Maureen. 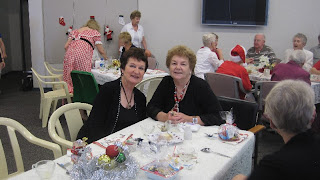 And a special one for Jill because she now looks at my blog!

I love the little boy with the gift wrap around him!
Very wise of you and Malcolm to think of putting your names on a waiting list for a place you both like, Brenda.
My parents never thought of such a thing, because they were happy living on Vancouver Island where everything is beautiful, but they were slowly being overtaken by Alzheimer's Disease, and the decision-making became the responsibility of my brothers. They are both kind, considerate men, but even they could not have foreseen Mom and Dad ending up in a nursing home right in our old neighborhood. Some might call it a stroke of luck, some might call it help from above, but the doctor at the facility called it a miracle, the two of them ending up on the health-care system's list for the same place a month apart. They both remembered it well because our family print shop had done work for the place, years ago.
Despite our wondrous luck with that, I think a couple would indeed be wise to make choices before the need ever arises.
All the best to both of you,
K