THEME THURSDAY
http://www.theme-thursday.com
asks us to contemplate the Future
THE FUTURE....TENSE
'Consider the future' they told me;
So, duly, I Googled the same,
Desiring some hints in a picture;
A spark to ignite my poor flame.
And all that I saw there were cities,
Fantastical places that towered,
With 'flying cars' up in the ether,
By some new-found substances powered.
It was 'more of the same' for the artists;
Just bigger and taller than now;
And everything seen there was man-made
By the sweat of some inventor's brow.
In this view of the future we're victors,
We're in charge,and we'll triumph at last.
We're not  pawns in the game and quite helpless;
Going down with our flag at half-mast.
But what if the future is barren,
With only old hulks lying round,
With all our great cities deserted
And all our tall skyscrapers drowned?
It is clear we will not know the answer;
Time painfully slowly grinds on
And The Future lies far in .....the future,
By which time we all will have gone.
Let us hope for a Future that's pleasant
And worthwhile and healthy to boot.
Let's hope we are not self-destructing
And taking the Dinosaur Route.
*
-------------------------------------------------- 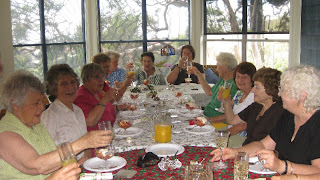 FESTIVE FOOD!
(Well, at least the Past was good; this was 2009)
Pre-Christmas cheer in Merewether;
Good friends breakfasting together.
Orange juice, champange-diluted,
Drunk from glasses slimly fluted.
Croissants, filled with crisp delights,
Tempting tastes and blissful bites!
Nibblies on every platter.
Lots of laughter, cheerful chatter.
Something that we all hold dear.....
Good friends, good food, and Christmas Cheer.
*
Posted by Rinkly Rimes at 2:32 PM

A possibility, this dystopian view of yours. Well drawn and chilly to be sure, but distinctly possible - with omly hope to set against it... there's honesty for you. But at least in the meanwhile I can thank you for a fine poem and wish you: A very happy new year to you and yours. Take care!

I hope this is not the way it ends for us..A poet writes what we might think or feel but can't say...This is a wonderful piece.