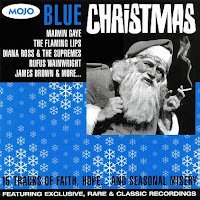 Sorry to spoil the festive mood
With an album cover that's rather rude!
Would I be featuring this? No! Never!
Unless I thought it rather clever.
At first sight Santa looks quite cheery,
Smiling mouth and eyes not bleary.
The snow-flakes add a cheerful touch;
Nothing to worry us very much.
And then we see the cigarette!
That must be the first one yet!
I've never seen a Santa smoking.
I hope this one is merely joking.
Diana Ross is featured, though,
So this may be from a while ago,
Before the dreaded weed was banned
In many places across the land.
So, OK, we'll ignore the 'puff';
Decades ago they allowed that stuff.
But look at the blurb! It looks quite harmless
Till we realise that it's charmless!
'Seasonal Misery' it declares!
I bet that caught you unawares!
*
----------------------------------------------------------------------

What if Santa Claus is late
On that most important date!
If he oversleeps on Christmas Eve
He'll miss the time he has to leave!
What if he gives a grumpy groan
And says 'I want to be alone!'?
What if he simply shakes his head
And says 'I can't get out of bed!
Leave me for just a moment more!'
And then turns over and starts to snore!
What if they tickle him and shake him,
But simply, simply cannot wake him?
He needs to be an early riser
When he's the Christmas supervisor!
Think of all his preparations!
Maps of all the different nations,
Weather forecasts to peruse,
Checking every local news!
Laying out his red regalia
(A thinner version for Australia!)
Taking toys down from the shelves!
Dealing with excited elves!
Making sure that each one packs
Toys in correctly-labelled sacks!
Working-out the wind-direction!
Doing a final sleigh inspection!
Counting reindeer! Is one missing?
Giving his wife a final kissing!
If he oversleeps on Christmas Eve,
He'll never be ready in time to leave!
He's got to be cheery, alert and bright,
To deliver the toys at dead of Night.
If he's only delayed by an hour or two
It just won't do! It just won't do!
What will all the children say
If he arrives on Christmas Day?
The children will see, in a bright blue sky,
Santa and his sleigh go by!
If he arrives then, for goodness sake,
The little children will be awake!
They'll see him then! That will be tragic
And ruin all that Santa magic.
It's too dreadful to contemplate.....
Dear old Santa being
LATE!
*
Posted by Rinkly Rimes at 7:42 AM