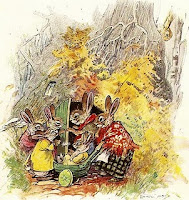 NAMING BABY!﻿
(For the Children)

While the Bunny Boys were out at play
A brand new Baby came to stay!
When they came home to Dad and Mother
There was a lovely Baby Brother!
Said Dad 'My boys, it's such a shame!
We just can't think of a baby name!
Mother likes Timothy but I
Am rather keen on the name of Guy.
There again, we thought of Tim
But that doesn't seem quite right for him.
There's Algernon, and Fred and Nick
But a name is much too hard to pick.
Then cried the Bunnies One, Two, Three,
'We can choose a name quite easily!
Don't you puzzle any more!
Let's call the baby Number Four!
*
Posted by Rinkly Rimes at 1:06 PM

if he's looking for his Rolex maybe he could use a hand...

Ha...very funny! thanks for posting.