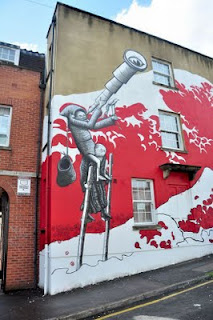 WHEN IS GRAFFITI.......?
When is graffiti not graffiti? And when is art not art?
Where does one thing finish? Where does another start?
The word 'graffiti' says to me that a vandal is involved,
And vandalism's a problem we all hope will be solved.
The experts tell us what to like; they seem to rule our taste,
And it seems to me some 'almost greats' simply go to waste.
Take the above..... it's not great art, even I'm aware of that,
It's someone's curious fantasy that I am looking at.
But it's done with care and enterprise; it was done for a certain reason,
And even if it's illegal it's not anything like treason!
The wall was dull, a dingey fawn, before the brush was applied,
And now a building that needed a lift has a bright red-cartooned side.
I work in the same strange twilight zone as the above creator;
Not good, not bad, ephemeral, just a mere fabricator.
And so I say 'Good luck to him!' (or her as the case may be)
Something red and cheerful is something we need to see.
*
---------------------------------------------------------------- 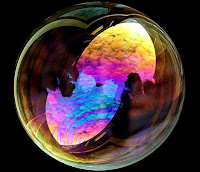 FROTH
Look on the soapsuds! You will see
A vision of all eternity!
See how each bubble blooms awhile
Then bursts with pyrotechnic style!
See how they follow, each on each,
Permanency out of reach;
Proud and rotund, a'gleam with light,
Each bubble floating ego-bright.
Each liquid universe is bound
In on itself, a gleaming round!
Look in each bubble as it rides;
Make out its delicate insides.
See every fleck and every spot.
Discern each whirling twirling dot.
Thus are we riding, fleck on fleck,
On some unimportant tiny speck
What was the Big Bang? Just a 'Pop!'
In a process that will never stop.
Time had no start. That's sure enough.
Time is peculiarly human stuff.
Time is a concept we invented.
Endlessness cannot be prevented.
The ticking of clocks is pure delusion;
The hours and minutes an illusion.
To the edge of Space we'll peer and pry.
'We'll see it someday!' that’s the cry.
But the edge is only of this sphere;
Reach it and other globes appear,
Each one a universe with stars,
Each with its Jupiter and Mars!
Each with its Earth and puny Genes,
Striving to find their ways and means.
Now, as we gaze upon the suds,
Bubbles are growing! Tiny buds,
Reaching maturity, bright full-blown,
Each bubble thinking it’s all alone.
Yet, as it bursts, another grows,
In a process that neither stops nor slows.
Consider the soapsuds' wild inanity!
Bubble and burst!
There goes humanity!
*
Posted by Rinkly Rimes at 6:44 AM

I find these kind of building decorations fascinating
and such an amusing, inventive notion to make something of a forever dowdy looking wall! In Brooklyn here, advertisements are being hand painted over brick walls and the freshly painted effect is stunning, albeit it is still advertising. I do feel one can
appreciate innovation and change even if it is not
exactly a Picasso or Matisse!

I like this kind of graffiti. some times the old building can look so bad. Art can draw ones eye to it. Look it did yours.....
My Ruby Link is here for you