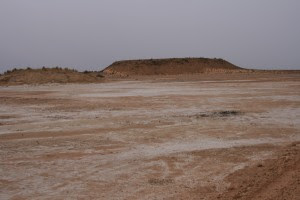 LOVELY LAKE!
Metamorphosis Australia! Lake Eyre is in flood again!
Thousands of miles away, last summer, way up North, they experienced rain.
And not just rain, but floods and deluges; the rivers swelled beyond their banks!
And many parched parts of the country greened again in fertile thanks.
Then slowly, slowly, month by month, the water reached down to Lake Eyre,
And scientists watched its progress with great interest from the air.
For Lake Eyre floods ONCE IN A HUNDRED YEARS! Read that twice! It's so amazing!
Where once just sand stretched far and wide, cattle could, by now, be grazing!
Germany, Italy and France could fit inside Lake Eyre with ease!
My mind boggles with the thought of raw statistics such as these!
But Lake Eyre is a place of myst'ry; humans have the gift of words,
But are they even half as clever as those 'silly birdbrained' birds!
For coastal birds by tens of thousands heard the silent clarion call
And now they splash in heavenly water, Lake Eyre water, wall-to-wall!
By what strange magic could they ever know that their's was a Paradise Found?
We communicate by science; they 'spoke' without a single sound!
Did the birds up North deduce it! When it rained say 'Here's the rain!'
Send a message to the coastal birds...... 'Lake Eyre will soon be full again!'
Life's a mystery we can't understand! Life is God, so I declare!
Metamorphosis! What a miracle! Let us give praise for Lake Eyre!
* 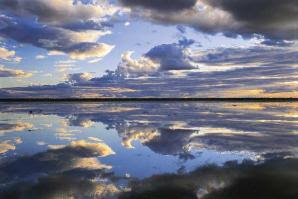 Lake Eyre as it is now! 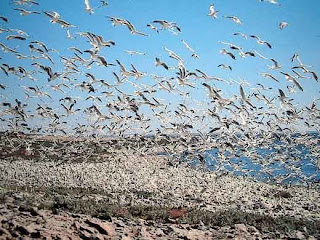 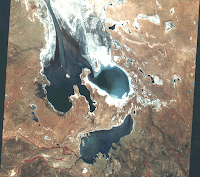 France, Germany and Italy could fit inside this lake! 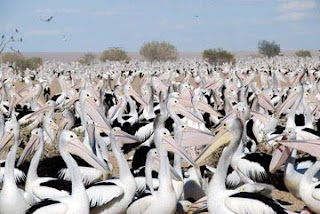 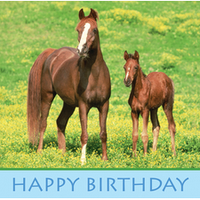 HORSES' BIRTHDAY!
Happy Birthday to the Horses!
They have aged a year today!
Lovely creatures! Let's applaud them
As they gallop on their way!
*
Posted by Rinkly Rimes at 10:01 AM

So interesting and what better way to find out about oddities of nature than to visit other bloggers.
Thanks for sharing.

That is amazing! How long will this lake last?

Love that pic when the birds arrive!

wow, how interesting! I love the image of the clouds reflected in it...and would not like all the birds...too many for me.. heehee

What a huge change rain makes! The lake is beautiful!

Very interesting. I've long suspected that animals (and birds) are a whole lot smarter than us.

Absolutely incredible!
And your pictures ROCK!
Have a great weekend..
Smiles~
C

brilliant post, what a magical place it must be every one hundred years or so ... and how did those birdies know?

Something so outstanding to be had in just small doses makes it even better right! Happy birthday indeed to your fine horses!

My goodness I am having so much fun tonight! I am learning lots of new things! Thank you. I hope you will come visit me too!

This lake is so interesting and the happy birthday for the horses. Just sweet!

I so enjoyed the visit!

This is so interesting...

A most fascinating natural occurance! Your photo of the full lake is lovely!!

I hope the lake remains for many more years!