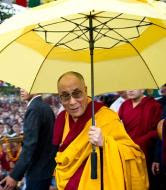 DALAI CHARMER
Here is a famous person, a very genial fellow,
Dressed in his traditional robes of richest red and yellow. 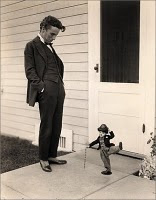 
When Charlie Chaplin was a boy
I doubt if he ever had a toy.
His family was poor as poor;
He little knew what was in store!
Of course, he never realised
That he'd be honoured, idolised,
And that his baggy little Tramp
Would be a film star and a champ.
So, when everybody knew his name
And he was wallowing in fame,
This very simple little toy
Delighted Charlie, the little boy.
*
Posted by Rinkly Rimes at 12:37 PM

What a great image.

So Charlie became a toy for everyone. What a great thing to do.

Did Dalai Lama come to Australia?

Two very different men. Both so influential in similar ways - they make us happy.

When you think "mellow" you definetly think of Dalai Lama :)

The poems are wonderful. What great subjects to write about!

Love that shot too - and great poem!

Interesting post and such contrast too! Love your choice of subject for the color yellow :)

Love the poems and the photos...

Enjoyed your poem. The Dalai Lama seems a kindly man to me too.

The Dalai Charmer! I love it...

Well done. On both poems.

Yes he always has a smile on his face....he is a blessing to a crazy world....charming post...bkm

Love the poetry. I love you found a picture of the Dali Lama with a yellow umbrella!

What lovely words and pictures to delight us on our trip to Alphabe-Thursdays Rainbow Summer School.

I really enjoyed seeing you here.

It was fun to read your work.

I've never met him but share your view - I'm sure he is a charmer!

Two of my favorite people BB!!!!

Oh these are both great!

You just have a knack for these. Another round well done!