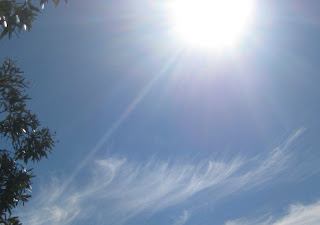 
An Aboriginal Elder was approached by the younger clan,
For he was an old, respected and traditional type of man.
'Tell us' said the young ones,'What will the weather be?
You forecast it year after year with the utmost certainty.
If the winter will be chilly we must gather lots of fuel,
For a winter in the outback without heating can be cruel.'
'Give me time' said the Elder,'I'll give the matter thought.
Come back and see me tomorrow and I'll give you my report.'
Now, sad to say, the Elder was growing rather old,
And he found that future weather-patterns could not be foretold.
He looked up to the heavens and he saw the starry sky
And he looked down to the earth below, which was brown and baked and dry,
But neither told a story of the winter on its way,
And he wondered what he could announce to his fellows the next day.
Suddenly, a great idea! He'd ring up and find out!
The Bureau of Meteorology would know without a doubt.
The phone booth was on the highway; it was not too far away,
So, under cover of darkness, it was there he made his way.
The response was not too certain. 'It could be cold' they said.
So he formed a plan of action and rehearsed it in his head.
Sure enough, the young men came around and questioned him next morning.
'It will be cold. Collect the wood' that was the Elder's warning.
So sure enough, the younger men began collecting wood
And built their piles as wide and high as anybody could.
Each day they went out foraging. The bush was soon denuded!
The Elder started worrying; were they being deluded?
So, once again, he made his way to the local telephone,
Feeling a little nervous as he heard the dialling-tone.
' Are you certain that the winter will be very, very cold?'
He asked the Bureau Boffins, only to be told
'The winter will be bitter; the worst for many a year!
Our scientific evidence makes that absolutely clear!'
'But how' the Elder asked them ' Can you be so very sure?
You weren't so very certain when I questioned you before!'
'We have it on the very best of information, friend.
Our satellites view lands up North to find the latest trend.
The Aborigines in the bush know weather, good and bad,
And I tell you, sir, we've noticed they're collecting wood like mad!'
*
Posted by Rinkly Rimes at 6:56 AM

That works beautifully, the one describing the other
that might not occur if one just saw the photo. Language is the dress of thought behind the image - with apologies to Johnson!

Loved the story and a the pretty clouds! Happy skywatching!

I LOVE your photo and Filigree poem - it is wonderful! Also enjoyed very much the story of the Aboriginal elder, especially the punchline:) AWESOME! Thank you so much for your comment on my poem - and yes, words DO have an impact, yours, mine and all of ours........keep writing and adding your good stuff to the planet!

How interesting.
Sydney - City and Suburbs

Very, very beautiful. Love the wispy ones. They are always some of my fave clouds.

Love them! I really love clouds of any sort! :)