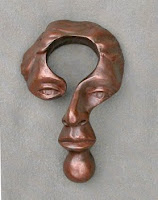 Say Mr Mandelbrot, how can it be
You discovered a pattern that grows like a tree?
When we see your discovery, there on the screen,
There's a part that we see and a part that's unseen.
A bit like a beetle, it sits there quite still,
And there's not the least hint of its wonders until
With a click of our 'mouse' we move in and lo!
An invisible world comes to light! What a show!
We move in more closely and focus our gaze
On a newly-found country, all beaches and bays.
See, look! There's a headland and there is a lake,
And that blue part resembles the eye of a snake.
And, if this is the eastern shore, this must be west,
With the south and the north just the same as the rest.
With repeat and repeat going on evermore,
From hilltop to island and back to the shore.
Mountain and lowland and heartland designs,
Created from blending and curving of lines!
Move in! Undulations now rise up and meet us.
The first pattern's gone but these new patterns greet us.
This one is flower-shape, petals full-flare,
And see! There's another one, right over there!
Another one up and another one down,
All seemingly decked out like jewels in a crown.
Seek further! Whose fingers are these I see splayed?
They point and they part, childish fingers new-made!
With copies all round them that go on for ever!
Ah yes, Mr Mandelbrot, you've been so clever;
To discover a pattern and give it your name!
A pattern that changes and yet seems the same!
A pattern that fascinates; leaves us in awe,
For we are the first generation that saw
A Mandelbrot Set with its ravishing sights,
All there on our screen and all pricked out in lights.
Oh Mr Mandelbrot, how could it be
You discovered a pattern that grows like a tree?
*
Posted by Rinkly Rimes at 7:31 AM

i love your poems and especially the questions that have no answer.

Thank you so much for your kind words about my jewellery on my Rainbow Blue-post.
Best wishes,
Anna
For the benefit of other readers:
Anna's Rainbow Blue Jewellery

I am Harriet said...

I often wondered some of the same questions. A few I wouldn't want to know :)

Have a great Thursday!
http://harrietandfriends.com/2010/08/happy-19-us-women-we-do-matter/

You sure have the gift for poetry. Very nicely done. Happy T13!