ABC WEDNESDAY
http://abcwednesdayround3.blogspot.com/
Letter 'F'
FOLLOWERS
This word has changed its meaning with the passing of the years.
Cast your mind back to the gentler days of yore,
When the mistress would chastise her maids and, no doubt, cut their pay
If amorous suitors hammered at the door.
'No Followers allowed!' she'd say when they were interviewed;
'No men-friends lurking by the garden gate.
If I should chance to see you with young Fred the butcher-boy
Instant dismissal! That will be your fate!'
*
The descendents of those servants lead very different lives.
Their love-lives are unfettered and quite free.
And then, of course, there's blogging, with a language of its own;
Words used by us, the Blog community.
One Follower is not enough! We yearn for eight or ten!
We tot them up and weep for those we lose!
And we Follow other people (in Cyberspace, of course)
And we're choosy about who we're going to choose!
*
Gerald Gee has summed it up in his cartoon, seen below,
(Poor lady! She has clearly been deserted!)
Just think how far removed she is from that poor Victorian lass
Who got the sack because she merely flirted! 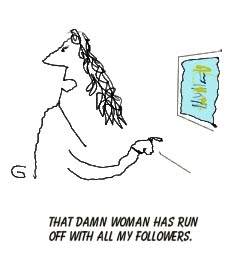 Gerald Gee
AND THE REST!
(Australia has just had an apology for an election.) 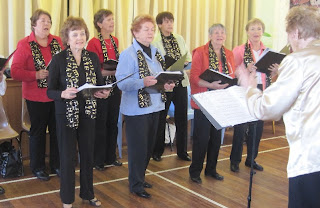 Yesterday the choir sang for a group of Stroke Recovery patients. We were rather a small group and Pam and I were the only altos so we had to work hard with our harmonies!
Posted by Rinkly Rimes at 7:28 AM

A very interesting read! Love the choir of stroke victims...lovely.

I do like your take on 'followers' and love the picture of your choir. Small groups like yours spread a lot of joy among the elderly and confined.

I would sing alto with you, gladly, but require a lot of support on both sides to stay on key :(

The Follower is a great read for the F Day, Brenda! Hope your week is going well!

so true, things has changed its meaning... interesting..

My ABC Wednesday here
And Here Too
hope you can drop by, Have A Nice Day!

Lol ! what a nice post ! Poor servants !
Gattina from the ABC team

I can relate to your alto story. And yet, don't you hate it when you can unintentionally drag the sopranos along to sing your part. Stay on the melody!

Love the poem on elections and politics.