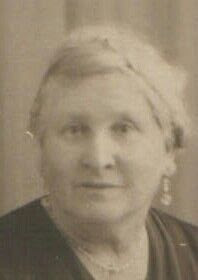 FACE OF THE WEEK
KITTY
I am my Mother's daughter; that's how it always feels.
But this is not my mother; this is Caroline Eales.
This is my grandmother and yet I scarcely knew her,
So it would be so easy for me to misconstrue her.
I am my Mother's daughter; I am her replacement.
And yet I'm always pondering on exactly what this face meant.
*
This lady was my Father's mother; I only met her twice
And, when I did I seem to remember she wasn't very nice!
I suppose I was being noisy and she merely shook her head!
'I only like quiet children' ! Yes! That was what she said!
They're the only words I remember from a lady I rarely met
But her words have always lingered in a way I can't forget.
*
In my mind she became a dragon  and a distant one at that!
My mother didn't care for her; I became her copy-cat.
Caroline was bombed-out and she died within the year.
I heard about it vaguely but I never shed a tear!
Caroline Eales! A person I never gave much thought to,
But now that I'm a blogger I really think I ought to!
*
Because her features resemble mine, as shown in this picture here,
Much more so than my Mother's  or so it would appear.
And I am brusque with children, though I never mean them harm!
(Maybe I frighten my grandsons and fill them with alarm!)
Caroline Eales! A mystery but less so since I met Jean,
A cousin on my father's side whom I had rarely seen.
*
"She was always known as 'Kitty'. People remember her well.
She loved to entertain them and had many a tale to tell.
She was a member of the church and loved to get up and speak.
They say she was rather bossy; very far from meek"
And isn't that me? My Mother's daughter? Maybe not completely.
Maybe a bit of Caroline lingers there discretely!
*
I remember my Mother saying "Her house is full of dust!
I think she only cleans it when she absolutely must!
She sits there with her cronies, holding forth without a care,
While anyone can see the dust that's underneath her chair!"
Oh Kitty, Kitty, Caroline, we're related after all!
I bet if we got together we would really have a ball!
*
--------------------------------------------------------------

GO THE MAROONS!
(As far away as possible!)
If I were back in England and I ever said 'maroon'
I would always have to say the word as rhyming with 'baboon',
But, as I'm in Australia, I have become quite prone
To say 'maroon' as rhyming with 'alone'!
Maroon is a sporting colour, to do with rugby games,
Where grown men fight like tigers and call each other names.
I've never seen a rugby game, I'd find it very rough,
But others simply cannot get enough!
Maroon's the colour of Queensland (our New South Wales is blue)
And when it's State of Origin there's a lot of ballyhoo!
My son-in-law played Rugby and he thinks I'm rather strange
Disliking it, but I know I wont change!
I'm asked which team I follow and I always answer 'none',
And then I'm thought of as a person others ought to shun!
So I sometimes wish I weren't so out of touch because
It's hard to be unsporty when in Oz.
*
Posted by Rinkly Rimes at 7:04 AM

Your grandmother must not have cared for children and you obviously do.

We are products of all our ancestors when all is said and done.

Maroon (as in moon) is the only correct way.

I know that I have long ago lost this, but I'm a sucker for a lost cause!

Isn't that interesting! Yes, I can see the likeness there much more than a likeness to your mother. And the photo of you underneath in A Twirl and a Grimace
reflects the likeness to your father's mother. I know almost nothing about my father's mother yet from a
a single photo I have of her I suspect my inheritances
follow from that side of the family! Riming is such
a good way to fill in the known with the unknowns.

I never met any of my grandparents - they had all passed away by the time I was born. I used to be jealous of my friends having visits from grandparents and spending holidays with extended family. But I had a glamourized vision of grandparents, I'm sure.

Isn't it amazing the power of a few words? That they linger for decades...