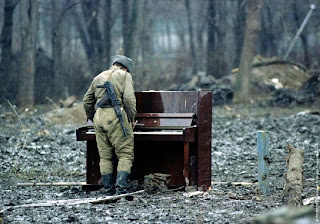 
PIANO PLAYER
An intriguing photograph, deserving consideration.
What do you make of this little mystery?
A soldier seemingly escaped from some mad conflagration!
A piano where a piano shouldn't be!
Did some refugee start fleeing with the piano on his back
And find it was impossible to carry?
Did he fall behind the others as they walked the woodland track?
Did they plead with him and say he must not tarry?
Did it break his heart to leave it in the woods, to age and rot?
Did he cast some backward glances as he left?
Did he then flee with the others, all in fear of being shot?
And was his heart forever quite bereft?
Perhaps this soldier was a man with intellect and soul;
Perhaps he slipped away to ease his mind.
Perhaps he was revolted by his ghastly war-like role;
Perhaps this piano was a wondrous find.
What did he play, I wonder, as he stood there in the glade;
Maybe 'Chopsticks' was all that he could play.
But two hearts were united in the forest's leafy shade,
The soldier's and the man who ran away.
*
Just my interpretation! It could have been a pose
To advertise some product! Nothing more!
But don't tell me anyone 'out there' who, in reality, knows;
Reality can sometimes be a bore!
* 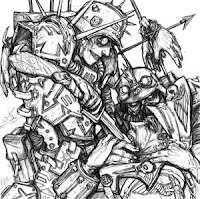 HUMAN TORTURE
(An Acrostic suggested by 'Acrostics Only')
Humanity has failed when there are torture methods used.
Ugly methods fail to get results from those abused.
Many men admit to things that simply are not true
All because they cannot stand the pain they're going through.
No doubt there  are always men who delight in causing pain;
*
Thus it was in times gone by; so it will be again.
Our so-called progress hasn't wiped-out such abominations;
Ruthless men will always find themselves just motivations.
Taunts and insults often hurt as much as agony;
Unhappy victims scarred for ever by brutality.
Rogues and rebels will abound whatever we may do.
'Eliminate all torture!' Surely that's overdue!
*
Posted by Rinkly Rimes at 8:34 PM

you watch the piano made in NZ starring Sam Neil? They had a piano out in the bush like your photo.

Nice pairing. Torture is a slippery slope to nowhere as well as being immoral.

Yes I also thought of the movie "The Piano"where a piano was left on the beach. Thanks for your poems.

i wish i have your thought of ideas...

and the way you put the words..

and playfully use them

Amazing photo of the soldier playing the piano! And yes, torture should be banned.

"The Piano"where a piano was left on the beach - I liked that move but not the ending it was to happy.

I want to know why it is there and why he is playing?