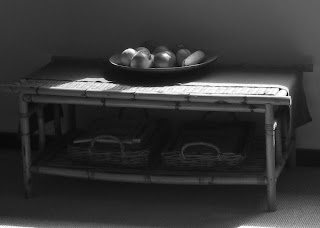 FRUIT BOWL
(A cinquain)
Fruit.
Piled, juicy.
Reflecting, shining, appetising.
Cradled in a bowl.
Succulence.
What is a cinquain?
A cinquain is a short poem with 5 lines. The theme of the poem is a noun and the rest of it is written to describe that noun. This is the structure it follows: First Line: A noun that is the subject of the poem as well as the title. Second Line: Two words that describe the title/noun. Third Line: Three ‘ing’ words that also describe the noun. Fourth Line: A phrase with four words that relates to the noun. Fifth Line: A synonym for the noun in the first line.
Posted by Rinkly Rimes at 6:35 AM

Your blog always has such cool verse and photos!

Very fitting - and you have taught me something new.

I love the light highlighting the fruit

Gotta remember the cinquain form Brenda. I really like the photo.

Very nice photo. I didn't know of the cinquain, but I like the economy of words.
Altogether a very appealing post.

such a wonderful b&w still life!