The Oldest School in Australia 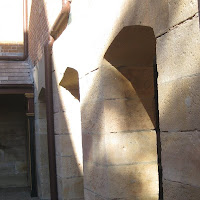 THUMBS UP!
People are often asking us what do we do all day;
Well, we think our second childhood allows ample time for play.
Let me give you an example, so you get some idea....
*
We went into the market in a little town near here.
We were only in the market for half an hour or so
And then we made our way outside for it was time to go.
And there stood a traffic warden, writing with his pen
And, as you know, they never are the most popular of men.
When Margie saw him writing she began to make a fuss,
Saying 'We're two old age pensioners! Why should you pick on us?'
'Carry on like that' he said 'And you'll find you get what for.
I can write more tickets, Madam! Many many many more!'
So I began to swear at him; my language was quite ripe
And I could see he wasn't a really understanding type!
Another ticket followed! Then Margie loudly hissed
'He hasn't noticed the worn-out tyres! How lucky they've been missed!'
'That's another ticket' the Traffic Warden said;
'Now I look I see that there's a very dodgy tread.'
Then I whispered back to Margie 'Darling! Don't contemplate
Telling him my Driver's Licence is way way out of date!'
'One more!' he yelled triumphantly and stuck it on the screen.
The car was peppered with tickets! More than we'd ever seen!
Of course he stood there beetroot red and kicking up a fuss
When we said 'We'll be going! We mustn't miss our bus!'
*
It was such a harmless pleasure when all is said and done.
After all, we Pensioners like to have a bit of fun!
*
Posted by Rinkly Rimes at 11:03 AM

I came from old school. And I always remember my Alma Mater. Although they renovate some bits and pieces. Come new innovation of building and homes.

I still want my old school.
Painted with memories of pins and pots.
God bless you all.

Lovely old building and a great shadow shot for the day, Brenda! And I love the way we pensioners find ways to have fun!! Enjoy!

Great Shadow shot. And I love your story about the traffic warden, had a big laugh over that one.

Then when you think of the ancient, Aboriginal history of Australia, it just boggles the mind...beautiful stone structure, in a European sorta way.

Wonderful composition and shadows - I hope the education lives up to expectations.

I love the deep shadows, sun angles, and the soft muted shadows you caught in this single picture! Beautiful!

Love the pensioner poem too. Thank you for starting my day off with a laugh.

Wonderful building shadow..I laughed about the traffic warden..I am always telling my husband..One day I will be arrested..can't seem to keep quiet when we get stopped for something silly..With everything going on in life..they pull you over to make sure your seat belt is on..Just haven't the patience for it..
Happy SSS.

I liked the SS shot but I truly enjoyed your little story about telling the meter warden off! :-D