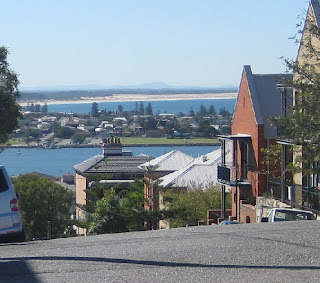 Brenda Bryant
MY WORLD TUESDAY
http://showyourworld.blogspot.com/
PANCAKES ANYONE?
Australia's flat as a pancake, as everybody knows!
Most of it is desert where almost nothing grows,
But statistics are deceiving! If one lives around the coast,
Steep, steep hills are features that one tends to notice most!
This view was shot by me last week quite near my grandson's school,
An area I don't visit much, not as a general rule.
The hill fell away beneath me, the river stretched-out below,
And beyond the river lay the sea, putting-on its usual show.
Then came the Stockton sand-hills where we 'grow' Hawaii's sand,
And then came some little mountains, delightful although not grand.
And all was seen from the top of a hill, that was simply high enough
To cause an elderly Grandmother to slow down a bit and puff!
This is my hometown, Newcastle, a jewel of New South Wales,
So if you just think 'pancakes' they've been feeding you fairy tales!
*
-----------------------------------------------------------------

See the unprotected duck sitting on its nest.
It's easier to hit a duck when it is at rest.
The ducks all flying in the sky are harder, far, to hit.
The hunter likes to aim his gun at the ducks who choose to sit.
It's just the same with charlatans in finance or the law.
None of them aim at canny folk, though they're quick on the draw.
Get clued-up on your legal rights, then you will be quite sure
*
Dirty deeds will not be done as they've been done before!
Useless to quack of ignorance when you've been duly fleeced!
Caution should be your by-word at the very least!
Know your enemy my friend, then, with a bit of luck,
You won't end up dead on your nest, a poor little sitting duck!
*
Posted by Rinkly Rimes at 6:08 AM

Such a beautiful scene! I'd walk down that hill to get to the water in a heart-beat!

what a interesting and fun post, funny i didn't know we imported sand from austratlia!

thanks for showing us your world today

It is a beautiful scene.
Sydney - City and Suburbs

Beautiful photo from your world and interesting information about Australia and such a clever acrostic.

I love your scenic coast. You made me smile of your title post.

Thanks for the info about Australia.

Lovely photo and I can confirm about the hills in Australia. Son and family live in the Adelaide Hills and some of the roads to their house from the town are pretty steep. Love the poem - very clever. A

Its a wonderful place and thanks for sharing your lovely poem.

Well now I know where Hawaii's sand comes from. I like your acrostic also.

Fun doing a poem. I contribute to Kiva, too. Good work.
/ My Muskoka !

so behold..the tongue is twisting a brain...

with such gallant and dare..

Love that first photo.. and your enchanting rhyme.

I'm just loving it!! Great job and beautiful photo. I'd like to visit Australia some day. ~karen