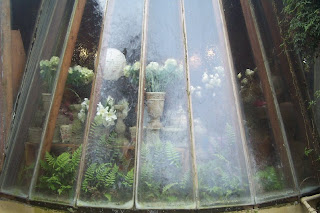 QUASI
Quasi is a robot who's able to converse!
(I wonder, can he also write silly things in verse?)
He's an anthropomorphic humanoid! How's that for a title?
Of course he has to be programmed! That's absolutely vital.
He's a lot cleverer than us because his googly eyes
Not only register pleasure, anger and surprise,
But they also change their colour according to his mood!
Compared to his our human eyes are really rather crude!
His eyes can swivel up and down, the lids can move as well,
So he can be quite expressive when he has a tale to tell!
His antennae have been programmed in the manner of dogs' ears;
He can wiggle them according to the various things he hears.
His speech has been recorded, so this aspect is slim;
We have to gauge expressions if we want to speak to him.
I think that he looks rather sweet, in a robotic way.
But 'Give me a real-life squeezy man!' that is what I say!
*
Posted by Rinkly Rimes at 6:43 AM

Enjoyed your cinquain to complement the beautiful conservatory reflection! And Quasi is quite a character!

NOTE: For some reason your link on Weekend Reflections does not seem to work! I tried several times! So then I just entered your blog title to get here!

I enjoyed your beautiful cinquain.

That's a nice looking Conservatory but I really like QUASI!
I can picture him tending the plants. :)