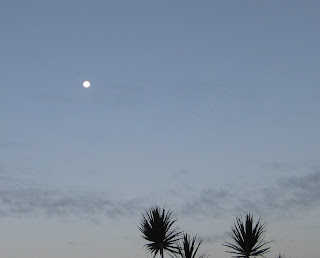 Brenda Bryant
OPTICAL ILLUSION
A pin-head moon in a great expanse of never-ending sky
Will later appear as a great balloon and we all wonder why.
Here the early morning moon swims in the azure air;
So small it seems we hardly notice that it's even there!
At other times an enormous globe seems to touch the earth,
Amazing us with its brilliance and its enormous girth.
The difference in its size is almost beyond believing
But the odd thing is that we ourselves are doing the deceiving.
When we see the moon with enormous space milling all around it
It looks so very tiny it's amazing that we found it!
But see it on the horizon and we can't help comparing
With trees and buildings and other things at which we're also staring.
*


Heaven must be blue and sunny
Except the evenings, which are pink.
All is sweet, as sweet as honey,
Very charming I should think.
Even though it's heavenly
No! Don't save a place for me!
*
Posted by Rinkly Rimes at 6:41 AM

Truly lovely - and true!
I dont seem to get much blogging done lately, managing just once a week but reading here makes me realise how much I have missed the company of my good friends like yourself! my how time flies when in the company of good people