BRY ANTICS
May 2nd
I haven't many photos this week, even though it's been a very full and busy one. Sometimes I forgot the camera and at other times I felt I'd intruded, photo-wise, once too often, at a certain function! But let's get to world news first....

Of course, the Gulf Oil Spill has dominated our news, not because it's in America, but because it's such an Awful Warning. Our precious Barrier Reef is threatened by spillages all the time. Of course, the American spillage is enormous and the frightening thing is that it will go on  for so long before it's stopped! Sometimes I wonder what we're doing to the Earth! 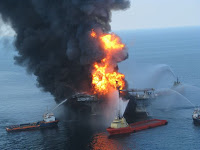 The start of it all!
Almost on the same topic, because it equates with human greed and wanting 'things' is the Shanghai Exhibition. It's certainly very overwhelming and clever, but one has to think of the millions of Chinese who have yet to have enough to eat! My Chinese pen-friend, Mr Tang, tells me life is still not equitable in China, although, of course, he's proud of the way his country is making all the running in world affairs!

Here is the Australian Pavilion; red earth, of course!
One of our most notorious criminals was buried after his death by violence in jail, this week. His golden coffin (said to be similar to Michael Jackson's) caught everyone's eye!

Yet another comment on human greed?
My life was a little less newsworthy! On Sunday I had to get up before dawn to go to the War Memorial to sing in the choir for the ANZAC Day service. As usual the weather, after a blissful month of sunshine, was dreadful, pouring with rain. I found myself next to the bugler playing the Last Post and I had to hold my umbrella over her while drips careered down my neck! 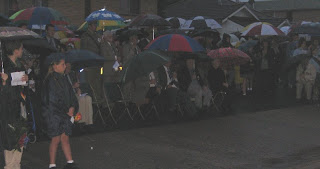 Afterwards I skipped the usual celebratory breakfast and went home to a hot shower to watch the Sydney march on TV! 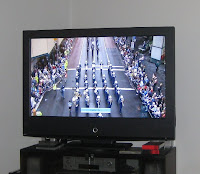 On Monday I went to the Probus Club meeting in the morning. It was pleasant, but our Speaker was very elderly and forgetful and it was almost embarrassing to listen to him. He spoke on the subject of 'Women in Politics' and I got a bit tired of the implied message...'Really they do very well since all they've done is run a home!' Still he was 85 so one would expect him to be old-fashioned!
On Tuesday I went down to the Central Coast to a place called The Entrance to 'do my poetry', My program went very well and I sold a fair number of books but the journey was rather long and I had to travel home lugging a heavy bottle of wine among other things. So I don't think I'll stray that far from home in the future.
Wednesday was a most successful day. We had our 'Australian Melodrama' workshop at The Cricketers' Arms, and the group was very enthusiastic about the play I've written. I was in my element. They all said they'd rather have it as our main play this year than 'The Red Barn' .I was a bit disappointed as I was looking forward to putting on the latter play, but we're a very democratic group so I agreed. We all walked out without paying for our coffee so I had to ring up later in the day and apologise!
In the afternoon I went to see the Vascular Specialist about my PAD. I have to see him every six months about my right leg and have a check done on my carotid arteries. Who wants to grow old? Malcolm took this photo of me at the hospital while we were waiting for the transport. (I think I'll enter it for Shadow Shot Sunday!) 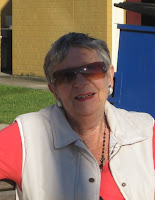 On Thursday we had Max all day as Rebecca and her family left for NZ on Monday. He was utterly angelic all day. I took him shopping and he dragged my heavy trolley all round the shops. Then I tried out the local Mothers and Others Centre (I was definitely an 'Other') and he enjoyed that although he was a little shy. 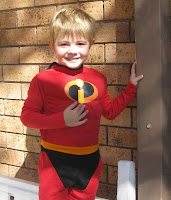 He was very happy to be a sort of Batman Person!
On Friday we had a rehearsal of 'Jeweled Jeopardy' at Pam Morrison's house. She's house-bound after a knee operation. We were rather ragged as we haven't done the play for several months and we have a performance next week. So we had another one today (Saturday). We were much improved and we had the usual lighthearted tea party afterwards.

Definitely mad!
I have to end on a worrying note. Michelle's brother, David, who, you may remember, was sent home from HongKong with heart trouble, has to have a heart-lung operation. It's his 42nd birthday today and the family has gone down to visit him. He's very depressed as you can imagine. He had such a high-powered job and it must now be in doubt.
So the week was a sandwich ; sad bread on the outside, good-fun jam in the middle.
Till next week,
Brenda
Posted by Rinkly Rimes at 7:07 PM

You have a very interesting life...

May God always be with you and your family