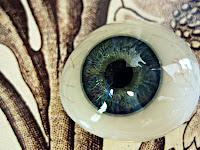 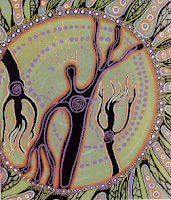 BABY AND THE BUNYIP
(One for the Children.)

Baby met a Bunyip and said 'How do you do!
I never, never, never, saw a creature such as you!
You buzz just like a bumble bee; you're brown just like a bear;
You sit beneath a banyan tree and brush your bushy hair.
Your eyes are bright as buttons and you bark just like a bird!
Your nose is like a buttered bun! Now isn't that absurd!
You're made of lots of bits and bobs and none of them agree!
But let me tell you, Bunyip.... you look beautiful to me!
*
(A Bunyip is the Australian equivalent of the Yeti.)
*
Posted by Rinkly Rimes at 1:30 PM

What a lovely double treat of a poem!

The first one, I was like imagining a knight in shining armor, a man of my dreams,, then suddenly the eye popped! waaaaaa...artificial eyes?

Btw, I wrote a poem on Mother’s Day dedicated to my mother and which I also dedicated to you; being also a Mom like me…please drop by to read! Thanks. Love, Amity…

Oh, don't be sorry! That was great!

I'll make sure to glue my eye in properly the next time I am out on the town. Hehehe.

Hell, after the gents I have met in the past years since my divorce, if his only flaw is a glass eye that pops out now and again, SIGN ME UP FOR THAT TOUR OF DUTY! It's better that his eye falls to the ground, and not his trousers as he lowers his morals!

a great magpie tale -- a little like life don't you think -- prince charming has a flaw as we all do. And this poem rings with a good sense of humor.

Well, nobody's perfect..sounds like he'll do in a pinch!
Well done...

ha. brilliant. appreciated the chuckle this morning...we all have our flaws...smiles.

this was perfect!! my heart was swept away and then landed smack down on a very hard floor as his eye rolled about :) i loved every minute of being here today, such a terrific magpie!

What fun - better an eye drop than brain shortage. :)

no apologies necessary...way to be unpredictable. very fun magpie!

I love the eye, and the bunyip, too!

what fun and remarkable piece!

Perfect, no need to say sorry. Poetic license you know. This was a fun prompt.
QMM