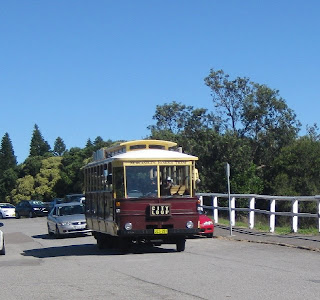 NEWCASTLE'S FAMOUS TRAM!
Famous locally, that is! There is no world-wide fame
But that great word 'famous' is included in the name!
Its claim to fame is simply that it isn't a tram you see!
It's simply a bus in fancy dress, deceiving the peasantry!
When visitors come to our fair town they like to book a ride
Not realising they're on a bus until they get inside!
Newcastle was once a tram-town, but the old trams bit the dust
And now we ride on buses, simply because we must.
The tram-lines are still visible as we travel on certain roads,
Reminding us of the days gone by and departed human loads.
Only the 'Famous Tram' is found, with sightseers galore.
This tram that isn't a tram lives on while the real ones are no more.
*
--------------------------------------------------------- 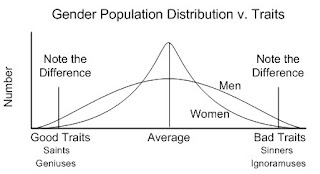 GENDER GEOGRAPHY!
I wonder whether the chart above reflects reality.
I must say, thinking it over, that I'm inclined to agree.
The prison population certainly bears this out;
The prisons are over-run with men, of that there is no doubt.
And Ignoramuses abound among the men I know!
Pass some drunk men in the street and you will find it's so.
And, certainly, nearly all the Saints have been well-and-truly male;
The female ones, by comparison, seem lower down the scale.
As for Genius, undoubtedly the men can claim the most.
Nearly all the names are masculine; no wonder that they boast.
So the males inhabit the high ground, but they also grovel low.
Women are more average; this graphic tells us so.
But let us not feel too ashamed even though this fact is real;
It's the women of the world, my dears, who keep life on an even keel.
*
Posted by Rinkly Rimes at 7:02 AM

It's so cute! What a shame you don't have trams anymore. I live in Gothenburg, Sweden, and I love our trams. We have buses as well, but I'm not particulary fond of them.

I to live in Gothenburg, Sweden. But I don't share Mona's good opinion of them. They are not pretty to look at and I hardly ever arrive on time when I travel with them. But I guess they look better then most buses.

I like the way the bus in your picture looks :)

It's sad that we have done away with the good parts of living. The days of the tram were probably something special.

Tram or bus, it looks like fun. I'm not so sure about the chart, I sometimes think that the numbers should be skewed to the right, but I'm probably too cynical...

wonderful, a bus in a fancy dress.