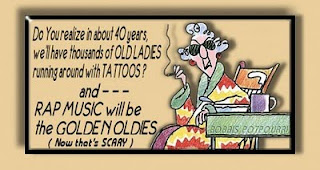 MAXINE ON SATURDAY
http://workofthepoet.blogspot.com/
GENERATION GAP!
I am sure Maxine, like many old dears
Has to cover up her ancient ears
When she hears the really terrible noise
Called 'music' by young girls and boys!
Does she cower down inside her room
As their cars drive by with their 'Boom boom boom'?
Every 'song' sounds just the same
To the ears of this so past-it dame!
*
As for tattoos, they're quite obscene!
And yet the 'wearers' seem to preen!
They seem quite proud of the inky scrawls
That are like graffiti on city walls!
Even a rosebud on a shoulder
Is going to look strange when a girl grows older.
Then there's the all-over sort.....
I cannot think of a retort
To express my positive dismay!
I simply turn my head away.
*
True, when the time comes for confessions,
I admit to youthful indiscretions
But mine have died the death discretely;
Now they've disappeared completely!
Tattoos are something made to last!
They'll still be there as time goes past!
Imagine the ink in all the crinkles!
Tattoos overlaid with wrinkles!
As for the hearing! All that din
From songs about sex and lust and sin
Will have brought on deafness with the years.
As mother said 'It will end in tears.'
Oh well! As the Bible says 'So be it!'
At least I wont be around to see it!
*
-----------------------------------------------------------

(An Acrostic suggested by Acrostics Only)
Manchester meant 'breast-like hill' in the days of long ago.
And the Celts once had a fort there as old diggings clearly show.
Normans took the city in The Harrowing of the North'
Castlefield still has a fort from which the Normans issued forth.
History says Flemish weavers settled there in time
Establishing an industry, creating wealth and grime.
Since then the city's flourished as a centre for all trade.
This was where the bulk of all the cotton goods were made.
Eras change and now the city's modern and up-beat.
Resolve to visit Manchester! Give yourself a treat!
*

Hi!
I'll agree with Maxine on this one. Very rude people with their booming music and tattoos do disappear into wrinkles. Gross! Love your poem today. Have a great day!