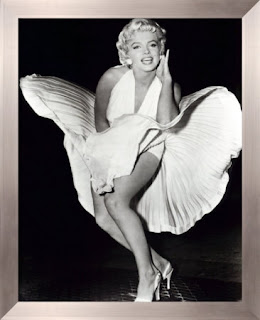 'FLOATING'
FLOATING FANTASY
One of the world's most looked-at images!
Far more provocative than a nude!
Marilyn Monroe in her famous pose
And no-one could call the picture lewd!
Out on the beach, the girls, bikini-clad,
Show far more flesh than is here revealed
And on countless stages a host of females
Show off attractions that are here concealed.
The secret lies in the floating skirt, of course,
Though the model's attractions can't be denied.
What will the next bold gust reveal to us?
What does Marilyn need to hide?
It's called titillation, that's the name of it;
Think of the wiles of Gypsy Rose Lee!
Lady Godiva used her hair for it;
Men had to imagine, but could not see.
What puzzles me most is Nature's reasoning!
Surely animals aren't the same!
Mating is mating and there's an end to it!
Why do humans play this game?
Why have humans evolved to titillate?
What is the evolutionary cause!
Is it a sign of our species' playfulness
Or just one more proof that all males have flaws!
*
----------------------------------------------------------

I bet you have mornings, the same as me,
When you slouch out of bed and you slurp your tea,
And your throat is sore and your mouth is dry,
And you look at life through a jaundiced eye.
And you pick your clothes up from off the floor,
Where you'd thrown them down the night before.
And you pull on your jeans, and you can't escape
from the fact that the zip has started to gape!
And you drag a comb through your lifeless hair,
And you pull on a shirt that needs repair,
And you look at that row of double chins,
Brought on by too many pies and gins.
And you have a cough and you wobble and flop
Down the street to the local shop.
And you know you're not going to win a prize.
You're not even a sight for the sorest eyes……..
I had a day like that last week,
When I was feeling way past my peak,
And I knew, as I stood in the checkout line,
That I'd never be anyone's Valentine.
And then I turned! And it was him!
I felt my senses start to swim!
Oh yes it was him! Oh yes it was Ray!
I knew him as though it were yesterday.
He was tall, distinguished, smart and slim;
Grey at the temples, but taut and trim.
His dapper little moustache was daring!
He had an erect and elegant bearing.
His piercing eyes were a brilliant blue!
Well, I did what any girl would do………..
'Its me, Elvira,' I whispered low,
Back in the days of long ago.
The line of shoppers passed us by.
He looked bewildered, a little shy.
'It's me!' I said 'It's me! It's me!
We met when I was twenty three!
You must recall the night we met!
Its magic lingers with me yet!
It was there, at the Hammersmith Palais de Dance,
That you threw me that provocative glance.
I wore that dress that was cut quite low;
I think that was why you said hallo.
'Do you come here often?' I heard you say,
And I knew Romance was on its way.
My perfume was called 'Drums in the Night!'
The revolving ball above was bright.
You squeezed my waist, you squeezed my hand
As we danced to Billy Cotton's band.
'I'm feeling rather warm.' you said;
' I vote we go outside instead!'
I went on 'And, in that darkened lane,
We kissed and kissed and kissed again!
And into my hair you whispered low.
You said 'Is this for ever?' and I said ……..'No'
Bill had a solid apprenticeship;
Bill was steady though a bit of a drip.
You looked exciting; my blood ran hot;
But marriage material you were not!
Yes, oh yes, I married Bill;
We've had six kids and we're married still.
It's been a struggle; we're on the pension.
But that’s too sordid for me to mention.
But I know now you were my true fate!
You were destined to be my mate!'
The look on Ray's face was rather strange!
His whole expression seemed to change!
'Excuse me,' he said, 'We've never met;
Yours is a face I'd never forget!'
And then, under his breath, as he turned to go,
I'm certain he said 'Thank god she said no!'
I gave him a look, a look that could kill!
'Please yourself!' I said. 'I much prefer Bill!'
*
Posted by Rinkly Rimes at 10:04 PM

Well, as always you made me laugh.

As for you second poem, I'd much prefer Bill too!

I think it's time for me to get
that 'Drums in the Night' perfume.
I would like a Ray in my life at the moment!

Your poems always leave me smiling...so clever and entertaining! Thanks for sharing these two gems.

Raising my hand. I'd like a case of 'Drums in the Night' as well. This was a hoot and surely MM was an enticement for many! Nothing left to guess, now. :)

You made me laugh and think about what is a man's word and how we play.

I liked secondone.. beautifully rhymed.. expressed..shared..confessed..but indeed a lovely message ... temptations could be mesmerising but temporary..

So clever and creative poems, love them :)

I enjoyed it very much!