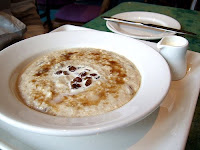 SUNDAYS IN MY CITY
http://www.unknownmami.com/

ODE TO OATS!
Oh glory of the Winter months!
Though art its greatest boon!
See thy mistress lying back
In a warm, pre-porridge swoon!
While her servant goes below
To stir and microwave
Thy glorious mass of wickednes
For which, so much, I crave.
The minutes pass, the stomach groans,
I lie and lick my lips,
Impervious to thy subtle aim......
Thy substance on the hips!
I hear a footstep on the stair,
I rise from the supine
My servant is approaching
With the porridge! Ah divine!
Tenderly placed upon my lap
On a sort of cushion-tray
Is a dish of thy deliciousness!
What a way to start the day!
Brown sugar rings thy plenitude
Thick cream thy centre crowns,
In a mixture of cholesterol
Thy plain old oatness drowns!
It's winter! Let it rain and storm!
Let 'cardies' be habitual!
So long as there's porridge on Sundays
Winter brings my favourite ritual!
*
---------------------------------------------------------------------

I thought it was only the world today that had gone right round the twist!
But here's the tale of a Gigolo no woman could resist.
No man could resist him, either, which made him a busy man.
It must have been an exciting case of 'Catch me if you can'!
Leslie Hutchinson, 'Hutch' to his friends, was born in a very small town
On the island of Granada, where boredom got him down.
In nineteen sixteen, as a boy, a piano prodigy,
He headed straight for Harlem to see what he could see.
His father cut off his allowance and so he was destitute,
Until the wealthy found him and the friendships with them bore fruit.
He knew the Vanderbilts very well and many players of jazz
And his sex-life began to flourish with lots of razzamatazz!
In '24, in Paris, Cole Porter fell for his charms
For he was equally cosy in male or female arms!
He moved on to Ivor Novello, a British musical writer
And then it was off to Merle Oberon, promising to delight her!
His voice, they say, was melodious, with a deep dark velvet tone;
Jessie Matthews taught him how to perform, using a microphone.
He soon became the toast of the town, the owner of a Rolls-Royce,
Earned, no doubt, with something more than his quite outstanding voice!
He bought a house in Mayfair, and many smart suits with tails,
And he was on very friendly terms with his Highness the Prince of Wales.
Yet still he was a black man, and, in those dark days of yore,
He had to enter buildings using the servants' door!
He had an affair with a debutante, who later bore a child,
When she told her husband 'It might be black' he went absolutely wild!
But Lady Edwina Mountbatten was the lover most well-known;
Her husband was Viceroy of India, as history has shown.
She showered 'Hutch' with expensive gifts like a ring with a royal crest!
And all he did for gifts like that was ....well.....just do his best!
But, finally, scandal dragged him down. By the middle of the century
He was overweight and bloated; not the god he used to be.
As years went by he had to accept the constraints of a penniless life.
The 'housekeeper' buried in a pauper's grave turned-out to be his wife!
Only forty came to his funeral; Mountbatten paid for his grave.
Gone was all the razzamatazz that the Gigolo used to crave.
*
So, when you hear of scandals every day, in the purple press.
Remember! Things haven't changed much!
Humans alway were a mess!

Labels: Sundays in My City

Wow - did Dad make you this? He is getting very fancy with his presentation!

Oh YUM to the oats Brenda. I only eat a South African brand of oats, called Jungle Oats, and have run of the supply I brought with me. My husband insists that Quacker and all the others available here are exactly the same, but I beg to differ. I will stay without until I get back to SA! I love the look of your bowl of oats. Scrumptious!

So good for you and me.

You make oats seem so sensual and the tale of the gigolo was fascinating.

Kaishon loves oatmeal! It is his favorite! : )

Forgive me if I am commenting twice, but I keep getting interrupted and I can't remember if I did or didn't.

What I wanted to say is that you make oats sensual and I found the story of the gigolo fascinating.

Oats! The breakfast of champions :-)