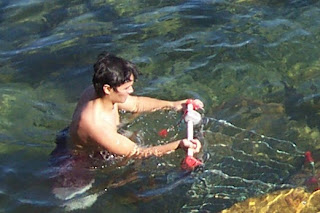 THE DOWNSIDE!
It's hard to be poetic all the time!
To focus on the upbeat in each rhyme!
To keep looking on the bright side
Concentrating on the light side
Ignoring all unhappiness and crime!
*
I set-out just to photograph the sea,
Which was blue and lovely as a sea can be!
But this vision of a trolley
Didn't make me feel too jolly!
No! I didn't dance and leap about with glee!
*
Someone had paid a visit to the store.
And the trolley had been loaded more and more.
Then they'd pushed it to the car
Which was probably not far
But returning it was really just a bore!
*
So they simply pushed the trolley in the sea!
Quite a sin against their own community!
And they stood and laughed, I think,
As they saw the trolley sink,
And just went home and had a cup of tea!
*
And here's a man who has a kinder heart;
A man who knows we all should play a part
In being neat and clean
And clearing up the scene
When other folk 'upset the apple cart'.
*
Forgive this watery view that's rather sad.
The message isn't beautiful, it's bad.
I'm hoping that, next week,
I'll find the view I seek....
A water view to make this old heart glad.
*
---------------------------------------------------------------

THE CONFESSION
Just last week an Italian went to a Priest for his Confession;
The Priest expected many sins and a very lengthy session.
But the man said without preamble 'Well, it's like this, see.....
When the Second World War was on I sheltered a refugee.'
'What a very noble action!' the Priest exclaimed with joy;
'You must have had the kindest heart, even when a boy!'
'Yes' said the man 'I started off with every good intent
But then I gave-in to avarice and started charging rent!'
The Priest responded 'That's not good but I've heard worse sins before
And many men are tempted in the dreadful trials of war.
Go in peace and still rejoice! There was someone you befriended!'
'Right!' said the man 'But when do you think I should tell him the war has ended?'
*
Posted by Rinkly Rimes at 6:48 AM

It is a shame, some people just do not care about the environment they live in. It is nice clear water, pretty shot!

Beautiful shot of a rescue mission. There are scofflaws everywhere!

Wonderful poems, I love the sea..live about 2 minutes away and love to walk along the shore early mornings.
Thanks for sharing.

A Garden of Threads said...

Some people just live in their own little world, the picture is not sad, that young man has gone to get the buggy out and has made a wonderful shot for you. Take care.

I'm so glad that there are those who are willing to clean up after others.

I laughed out loud at the man's confession to the priest!