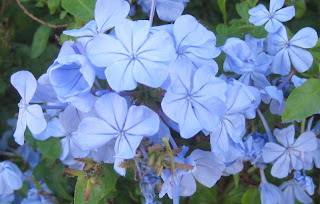 BLUE MONDAY
http://smilingsally.blogspot.com/
PLUMBAGO
Scarcely a day goes by but I think of Cecil John Rhodes,
A towering figure now considered flawed.
I'm reminded of sixty years ago and a very much younger me
Way back in the time when I went to live abroad.
I moved out to Rhodesia, which is Zimbabwe today,
From England, to a very different life.
Not to the present-day country with problems by the score
And a history that's full of grief and strife.
I moved to a sunny country, full of sunny people as well,
A land of wide open spaces and rich brown soil,
A land where two different races seemed to live in harmony,
With a future for which all were prepared to toil.
Cecil John Rhodes named Rhodesia, after himself, of course,
At a time when the British Empire reigned supreme.
He imagined the British ruling from Cairo to the Cape,
Though he never lived to see his shattered dream.
Yes, I lived in Rhodesia, now just a memory,
In the days before the sweetness turned to sour
And whenever we saw plumbago someone was sure to say
'Plumbago! That was the favourite flower of Cecil Rhodes!'

But what I thought was happiness was simply a mirage.
Resentment lurked, and bitterness and hate.
Those smiling faces were just masks; we were not loved at all.
Something that Europeans learned too late.
And the strange idea of Empire, which seemed normal in my youth,
Was an aberration, seen through eyes today,
And Cecil John Rhodes was a monster, a megalomaniac,
Though, way back then, he didn't seem that way.
But still I have a yearning for that old-time Africa,
Wicked and despotic though it now seems,
And it saddens me that all the good (and there was good, I know)
Has been consigned to the hopeless land of dreams.
And when I see a plumbago bush, which I very frequently do,
I'm sorry that the sweetness has turned sour
And it seems I still hear voices saying with reverence
'Plumbago! That was the favourite flower of Cecil Rhodes!'
*
Here is a quote from May 3rd 1902 describing Rhodes' funeral
'On leaving the house the visitors crossed the broad stoep which was a favourite resort of Mr. Rhodes, and thence passed up the wide terraces between masses of  blue plumbago in the full glory of bloom, and so reached the lovely green lawns which stretch far up the slope of the Devil’s Peak. Here, in the welcome shade of the trees, many rested, surveying the restful beauty of the scene, and sadly indulging in reminiscences of the great man now gone for ever.' 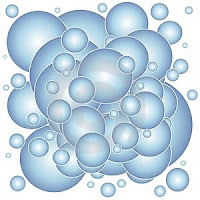 Look on the soapsuds! You will see
A vision of all eternity!
See how each bubble blooms awhile
Then bursts with pyrotechnic style!
See how they follow, each on each,
Permanency out of reach;
Proud and rotund, a'gleam with light,
Each bubble floating ego-bright.
*
Each liquid universe is bound
In on itself, a gleaming round!
Look in each bubble as it rides;
Make out its delicate insides.
See every fleck and every spot.
Discern each whirling twirling dot.
Thus are we riding, fleck on fleck,
On some unimportant tiny speck
*
What was the Big Bang? Just a 'Pop!'
In a process that will never stop.
Time had no start. That's sure enough.
Time is peculiarly human stuff.
Time is a concept we invented.
Endlessness cannot be prevented.
The ticking of clocks is pure delusion;
The hours and minutes an illusion.
*
To the edge of Space we'll peer and pry.
'We'll see it someday!' that’s the cry.
But the edge is only of this sphere;
Reach it and other globes appear,
Each one a universe with stars,
Each with its Jupiter and Mars!
Each with its Earth and puny Genes,
Striving to find their ways and means.
*
Now, as we gaze upon the suds,
Bubbles are growing! Tiny buds,
Reaching maturity, bright full-blown,
Each bubble thinking it’s all alone.
Yet, as it bursts, another grows,
In a process that neither stops nor slows.
Consider the soapsuds' wild inanity!
Bubble and burst!
There goes humanity!
*
Posted by Rinkly Rimes at 6:48 AM

I will never see a bubble again without thinking, "See how each bubble blooms awhile
Then bursts with pyrotechnic style!"

I enjoyed your poem about reminiscences of the former Rhodesia. It is really sad what has happened there but I do hope you still carry some fond memories of people left behind. That is a beautiful flower also.

It is really sad what's happening in Zimbabwe. Hard to believe people can be so cruel to each other.

I've never seen that flower before and it is gorgeous. My favourite colour.

How easily a little self-delusion makes a mockery of man's best intentions! A very moving reminisce and a delightful poem.

Now an apology: for not welcoming you to my blog, as I had intended. Thank you for the visit.

Thanks for sharing part of your life.

I've grown plumbago before; it is a lovely bush of blooms. Two poems in a day. You've outdone yourself, Brenda! Happy Blue Monday.

Thank you for sharing your talent with us today! I'm off to look up Rhodes--you've sparked my curiosity.

Have a great day!

'And the strange idea of Empire, which seemed normal in my youth,
Was an aberration, seen through eyes today,
And Cecil John Rhodes was a monster, a megalomaniac,
Though, way back then, he didn't seem that way.'

And your bubbles poem - like Unknown Mami, it will be hard to look at bubbles again without thinking of your poem! This is great: