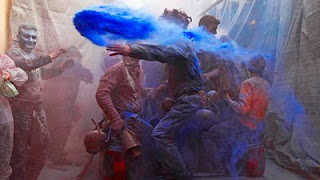 BLUE MONDAY
http://smilingsally.blogspot.com/
FLOUR FIGHT!
It's a good thing we're all different, and never just the same!
I simply cannot bear the thought of joining in this game!
Tomato fights, being chased by bulls, such frolics Continental,
Leave me wondering 'Are they sane? Or are they all quite mental?'
The thought of someone hurling dark blue flour up in the air
Makes me feel claustrophobic! I don't want to share!
But then, I'm not attracted to swimming in icy seas
Or crawling up sacred mountains, all the way, on my knees!
Paint Fights! There's another thing that strikes me as insane!
Being drippingly multi-coloured ...... it goes against the grain!
Let others flex their muscles in such desperate goings-on!
I like sitting blogging. Maybe I'm the crazy one!
*
------------------------------------------------------------------- 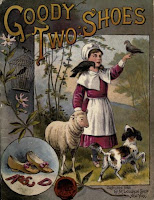 (An Acrostic)
Goldsmith was the author's name
Or, so we have been told;
Other writers have made a claim
Dating from times of old.
Yes, Goody was a little girl
*
Toddling in one shoe!
What a delight it was for her
Owning not one but two!
*
She was rather self-satisfied
Happy to have two shoes
Out in the street she called aloud
'Everyone! Hear my news!'
So now if you're self-satisfied
You too may be called that name.
If you're called 'Goody Two Shoes'
You have only yourself to blame!
*
Posted by Rinkly Rimes at 6:40 AM

You are not much giving to ranting, are you?
I like what I see, enough to add myself to your followers' list.
see if can keep up with you.

I'm with you on the wild behavior, though I have hiked Mt. St. Helens and found it totally worth the WORK! :)

Great acrostic. Thought provoking.
I had to look up the blue flour fight. I could not believe that they don't wear masks. Just sacking up bulk flour, I can hardly breathe around the fine particles. Amazing.

You have an interesting post today. happy blue Monday.

I'm with you, Brenda; these are not my favorite things either. Happy Blue Monday.

LOL I'm not so sure I'd like to be in a flour fight either. The blue is pretty though!

I also don't like those crazy and wild fights where someone gets hurt.

If you are the crazy one then I am too. I left all dangerous and wild experiences behind when I exited my teenage years.

I don't think anyone every called me goody two shoes. At least I hope not.

I think we are all in the same boat!