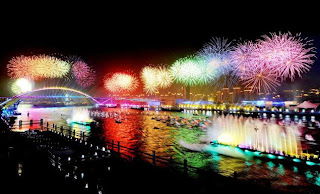 RAISE THE ROOF
(Acrostic suggested by Acrostics Only)
Roof-raising in the actual sense was a cause for jubilation.
As it meant a house was completed! There was a celebration!
In days of old the builders and the populace gathered round
Singing, laughing, drinking, making a joyful sound.
Even today, in Europe, it's cause for ceremony,
*
Tradesmen pat themselves on the back and drink up heartily.
However, this basic meaning has altered with the years.
Eagerly audiences 'raise the roof' if a pop artist appears.
*
Riotous bellowing occurs as in the scene displayed.
Overwhelming acclamation means the show has made the grade.
Operas, concerts, tennis matches, all are living proof
Fans of every shape and size know how to 'raise the roof'.
*
Posted by Rinkly Rimes at 11:38 AM

Great poems! The firework poem goes so well with the beautiful picture.

Brilliant Fireworks and of course poem to go along with it - what a spectacular sight that must have been to see!

Wonderful poetry,
Thanks for the visit, always good to meet another poet.

I loveeeeee your photo! Definitely a winner. Happy weekend!

Fireworks over water are the BEST! Look at those reflections...wow!

WOW what a great firework shot !
Loved the poetry too :)
Have a nice sunday !

still the best firework display in the world...

This is beautiful! perfect for color carnival!

In a little over a month, we'll have our own fireworks. But I don't want Summer to fly by too fast.

This has to be one of the prettiest, most colorful displays of fireworks I've ever seen! Of course love the poem too :-)

Congrats Brenda! You are this week's winner at the Color Carnival!!! I'll be using your photo as the featured winning photo on the next Color Carnival - it will be posted at 6pm EST on June 1st.

Hi, Brenda! Saw your entry in the color carnival and tracked it back here. What a great color shot of the fireworks in Shanghai. I'd love to see them some day. I love fireworks. Also, that was a clever entry on Raising the Roof using the 1st letter in each word to start the sentences! Thanks!