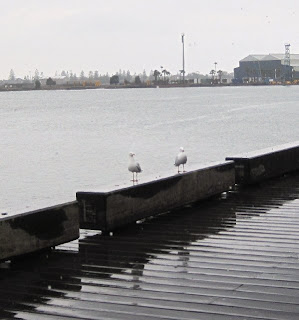 'Call this summer!' Daisy says,
'I can't believe my eyes!
This low-pressure that's arrived
Has taken me by surprise
I came down here for blueness
For sunshine and the tourist trade
Usually by the water
You and I have got it made.
We're used to little titbits
Thrown by passers-by.
But all we have this morning
Is a stretch of dreary sky.
I'm feeling rather shivery;
I have a little cough.
Believe me, if things don't improve
You'll see me flying off.'
*
---------------------------------------- 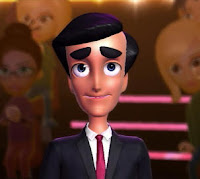 Paddy was in a quiz show that was showing on TV,
But the final question befuddled him, as you will quickly see.
'What is the name of a well-known bird that doesn't build a nest?'
This was the tricky question that had put him to the test.
Over and over he'd mulled it but finally, in the end,
He had to admit defeat and say 'Please can I ring a friend?'
So he rang up his good friend Shamus, who was waiting by the phone.
Shamus picked up the phone as soon as he heard the dialling tone.
' It's Paddy' the contestant said ' I've a tricky question here.
I'll say it very slowly and speak up loud and clear.
'What is the name of a well-known bird that doesn't build a nest?'
'Begorrah! That's too easy! Surely you could have guessed!
Said Shamus 'The bird's a cuckoo! You should have known the name!'
Paddy gave the answer and went on to win the game!
He won a lot of money and he wined and dined his friend
For he was now a wealthy man with lots of cash to spend.
'Tell me, Shamus' he said to him 'You weren't too bright in school....
And yet you proved at the right time that you are no-one's fool!
How did you know the answer?'  And didn't he get a shock
When Shamus said
'Well, everyone knows a cuckoo nests in a clock!'
*
Posted by Rinkly Rimes at 6:05 AM

Beautiful black and white shot and I enjoyed your narrative too.

So seagulls do talk about us humans behind our backs! Thought so! Adore it! And love the cuckoo story too!

I do like this! You know the summer's bad when the gulls stand about :)