We find ourselves in Holland, in 1945,When most of you who may read this were, clearly, not alive.The Second World War had ended, the enemy had lost,And now was the time when certain girls were made to count the cost.These were the Dutch girls who had been very friendly with the Hun.They had behaved expecting that the enemy had won.They were young and they were foolish and some of them fell in love:The uniforms and blonde good looks were what they were thinking of.And some of them were greedy, for the good life they could enjoyIf only they were really nice to some lonely German boy.
When the  Allies clinched things and the world returned to peaceThey hoped the local gossip was also going to cease.But no, they were dragged to village squares and daubed with tar and mudAnd even hit by villagers,  many of whom drew blood.But, worst of all they were almost scalped, losing much of their hair.Their spirits were really broken, sometimes beyond repair.But just look at these faces! The onlookers tell a tale.....The matriarch, the young girls, and each lip-licking male. The  elderly lady's really shocked, as the elderly often are,By all young people's 'goings-on' but is this going too far?The young girls are enjoying things. Lots of 'serve her right'!They didn't get any offers so they won't share her plight
On the other hand they're envying her and imagining her life.'All I have to look forward to is being a boring wife!'Then there are men, lascivious, wishing that they had beenAs privileged as the Lovers from the German war machine.The girl's reputation's ruined so from now on she's fair game,Until some local labourer gives her his family name.A piece of history captured and I'm sure that I can seeAn equally fascinating view of human psychology.
*

Committee Members line up, divided into Sheep (head-bands with sheeps' ears on them) Kings (crowns) and Shepherds (tea-towels) . Sheep are Left. Kings are Central. Shepherds are Right.
Shirley (or whoever) stands to one side, half-facing Committee. All parts are read from scripts.

Shirley
(cross) Come on Committee This wont do!
Our Xmas presentation's due!
Why are you all hanging back!
Any minute you'll get the sack!
Step forward and do what I say.
Let us get this under-way!
Sheep
(complaining) But we're sick of being sheep;
And we think you're just a creep,
Asking us to stand and 'Baaa!'
How very, very mean you are!
We want to act as other things!
Why oh why can't we be Kings?
Kings
( turning towards Sheep) Kings you say! Oh what a fuss
Wanting to look the same as us!
Our crowns are scratchy as can be;
Our velvet robes weigh heavily.
We are feeling very hot. (Pause)
(wheedling, to Shirley) But being shepherds would hit the spot.
Shepherds
(turning toward Kings) You must be mad! We shepherds lie
In damp old fields beneath the sky!
Our clothes are drab, our dinners meagre;
Any wonder we're not eager!
(threatening Shirley) I tell you, we'll fall in a heap
If you wont let us all be sheep!
Shirley
(increasingly irate) Come on! Come on! Who's running this show!
If I say Yes you can't say No!
(to the audience) Honestly, folk, I'm at a loss;
They simply wont admit I'm boss!
(to Committee) You are what you are and that's a fact.
All you have to do is act.
Sheep
(begging and whimpering) You just don't understand us fully;
We're tired of being fat and woolly.
We're tired of eating dry old grass
We want parts that have more class.
Please, Shirley, let us have our way!
Let us be Kings in the Xmas play.
Kings
(in a huff) They're welcome to our part as Kings;
The royals carry heavy things.
Myrrh and frankincense and gold.
These are pretty tough to hold!
Shirley! Really! We beg you yield
And let us be Shepherds in the field!
Shepherds
(placating) Come on, Shirley! Just give in!
It's certain that we're going to win.
Let us be Sheep and we'll toe the line.
Your Xmas play will be just fine!
We'll gladly follow the shining star
If we are just allowed a 'Baaa!'
Shirley
(angrily) Cut the cackle! And be festive!
(pointing to audience) Look! The audience is restive.
They're tired of your stupidity.
Everyone's obeying me!
I am Shirley! I'm the boss!
None of you seem to give a toss!
Sheep
(sulking) Being a King is what we like.
We warn you! We will go on strike!
Kings
(firmly) Let us be shepherds or we'll quit
And that will be the end of it!
Shepherds
(threatening) Let us be sheep or your play's a failure.
We'll spread the news all over Australia.
Shirley
(sighing defeated) Oh for goodness sake, the lot of you.
Everyone do what you want to do! (Pause)
Come on Sheep, what do you say
If you take part in this wretched play?
Sheep
(meekly) ' We Three Kings from Orient are
And we've been following a star'
Shirley
And now the Kings; your sheep are grazing;
Please say something quite amazing.
Kings
(in a singsong manner) 'The angels sing, the star is bright.
And we are watching our flocks by night.'
Shirley
And now the Shepherds. Do your best.
The audience must be impressed.
Shepherds
(smugly) 'Baa and baa and baa and baa'
Now you see how clever we are.
Shirley
Well, we got there in the end.
Committees drive me round the bend.
They squabble and they can't agree
And no-one ever listens to me!
And now before we all depart
We'll sing a song right from the heart.

Song. To the tune of 'Three Ships.' All sing. Not too fast, to allow breaths at the end of each line.)

Our Xmas play was rather tough
And Shirley got in quite a huff.
But most of us don't give a stuff.
For we're enjoying our Xmas.

(all, waving) Happy Xmas Everyone!

PS
Followed by this year's Christmas party for the Committee held at Shirley's house. My Grandma never enjoyed a life like this! 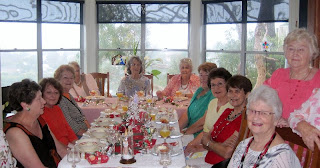 Not everyone but a good cross-section. 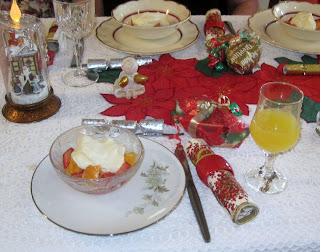 My personal setting. Shirley is the greatest hostess.

Some people helped with the washing-up!
Posted by Rinkly Rimes at 6:15 PM