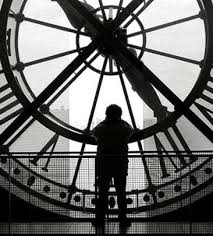 Time does nothing. Some insist
That Time itself does not exist;
It's just a human way of seeing
Something which may have no being.
Time doesn't 'hang heavily', as we say;
A day is just another day.
Only our mood  gives character to
Something without a point of view.
Time doesn't 'fly'; it has no wings;
No little pointy fairy things.
Time, in fact, doesn't even 'pass'
Except when we look in the looking-glass
And see the ravages of Time
(And isn't that a heartless crime!)
Our attitude changes with the years;
This is common, it appears.
When we're children Time runs so slow;
It's aeons till  those big teeth show!
As Grannies, Time goes by so fast
Next Christmas is joined  to the last!
As to Time 'counting', only we
Can make it a thing of quality.
'Quality Time' is a well-known phrase,
Considered in  many different ways.
A mother with children says 'Well, I'm
Always giving them Quality Time.'
She's making Time Count as best she can;
At least, that's her maternal plan.
But Time itself cannot count at all,
Go fast or slow, or even stall.
Time is Time is Time is Time.
And it's time I finished with this rhyme!
*
------------------------------------------------- 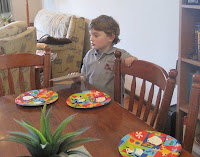 He should be looking happy; he's 'enjoying' his birthday tea;
We're gathered there to celebrate, although it's all low-key.
His family is moving house so celebrations are subdued;
Only a little cake to represent the party food.
Later on, when they're all settled, he'll have some friends to stay;
But, just for now, only relations help him to mark his day.
Multi-coloured party plates await the slice of cake;
It's been bought at the local supermarket, not even a home-bake!
Harry is looking wary; his motives are not nice!
He's looking to see which plate is going to get the largest slice!
'Boys will be boys' the saying goes, and when you're only six

Eating the biggest slice of cake is the best of party tricks!
Now Harry's eight, give him his due.......
Sometimes he says 'No! After you!'
*

like your take on time. And I agree, when young it seems to crawl, but older it gets the faster as well,