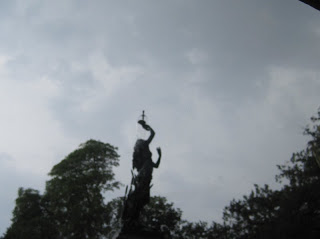 As we wandered round the park,
The thunder rolled, the sky was dark.
Soon we would be inundated;
A deluge was certainly indicated?
Now, was this nymph calling up the storm?
She certainly had an appealing form.
Her languorous arms were long and reaching
Caught in a motion of  beseeching.
'Open Heavens! Send thy rain
To wash this old world clean again!'
On the other hand, this looks like pleading
To the storm clouds, dark, unheeding
'Do not send the rain, I pray!
Thunder God please stay away!'
If it was the latter she surely failed!
It rained, it flooded and it hailed!
New waterfalls appeared like magic.
A wedding was ruined.......that was tragic.
But then, as suddenly, it was done.
The nymph held her arms up to the sun.
*
---------------------------------------------------------- 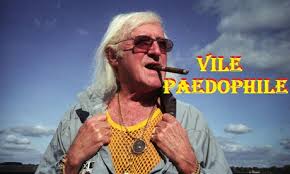 I refuse to be dismayed
As through scandal and shame we wade.
As famous heroes , now just wrecks,
Fall the prey of rampant sex.
As well-known 'chaps' from the BBC
Shock us with immorality.
As local politicians make a mint
From a crafty nod and an in-house hint.
*
It's true, there is more crime about.
Clay-feet abound, there is no doubt.
When I was born many yonks ago,
The pace of life was very slow.
My village life was calm and stable;
The horse hadn't bolted from the stable.
Doors and windows were never locked.
We were never shattered, never shocked.
Priests and policemen were men of worth;
Though War raged there was 'peace on earth.'
There were nasty things in other places
But in my world no crude disgraces.
They were all swept under the mat;
I am now aware of that.
*
But take a look at the maths of it.
Two billion people used to fit
On this ball floating round in heaven.
Now they tell me there are seven!
Three times and more the number that
My childhood self was looking at!
So there's bound to be thrice the crime!
No wonder it 'happens all the time.'
Added to this communication
Has altered, for ever, the situation.
No longer are things shoved under the mat;
The internet's made sure of that.
*
And here's a happy thought, my friend....
On one other statistic you can depend.
Three times as much sleaze exists today,
But look at it another way.
Three times as many of us are pleasant.
So don't get downhearted about the present.
*