Ruby and Alex had quarreled, as they'd frequently quarreled before.
Ruby had said 'You're an idiot!' And Alex replied 'You're a bore!'
Ding-dong went their words back and forward, while they just got nowhere at all,
They'd run-out of insulting phrases and they'd got no more names they could call.
So they both sulked, reverting to silence, a silence to cut with a knife.
Ruby wrote little notes to her husband; Alex wrote little notes to his wife!
' My car has a knock in the engine' wrote Ruby (the car being Alex's realm)
Alex wrote 'Something's 'off' in the kitchen' ( that's where Ruby held sway at the helm.)
Back and forth went the notes for a fortnight and neither would break down and speak;
For both of them yearned to be top-dog and speaking would mark them as weak.
Now Ruby would always rise early; she liked to indulge in Tai Chi
While Alex was such a deep sleeper he never woke naturally.
Well, it happened that there was a meeting, he needed the earliest train;
He knew that he'd have to wake early and that fact was rather a pain.
So he wrote a request on some paper and gave it to Ruby to read.
'Please wake me at five in the morning.' A straightforward message indeed.
Well, he woke up at 10.00 the next morning; the sun was quite high in the sky,
He'd missed his important appointment and he just couldn't understand why!
Then he saw a small note on his pillow. Yes, Ruby had written a gem!
'Wake up! Or you'll miss your appointment! It's already five-thirty a.m.!'
*
------------------------------------------- 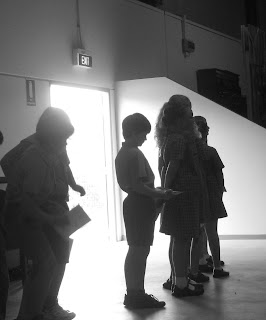 The school-year shuffles to a close.
We strike a very patient pose.
Lining up with serious faces,
Ready, as one, to take our places
Up on the stage with all the others,
To sing a song for the Dad's and Mothers.
A shaft of light and some silhouettes.
Every one of us Teachers' Pets!
This is all very serious stuff.
It will be over soon enough;
I wonder, then, will you remember,
How the school year ended one December,
And Max came along to see the show?
Will it all seem very long ago?
*
Posted by Rinkly Rimes at 10:05 PM