Strange that beauty can be found in the ugliest situations!
Here the artist is depicting the worst of conflagrations.
'Verdun' he called his painting, alluding to the battle
In which so many brave young men were slaughtered just like cattle.
This all took place before my time but this wonderful depiction
Brought back to me old memories of a grave, more recent, friction.
I was a child of the Second World War, so searchlights were all around;
They criss-crossed skies that were humming with planes; a haunting evil sound.
But I remember their beauty, against dark velvet skies;
The spot where they intersected was always a great surprise.
Sometimes we'd see a tiny plane caught in that neat criss-cross
Like a fly in a spider's web as it made its way across
To Birmingham or Sheffield  or some other target city.
I don't think I thought of the pilot; I didn't feel any pity.
To my childish eyes it was just a display, something worth looking at.
I didn't think of a brave young man about to knock a city flat.
It all occurred so long ago; there are scarcely any traces
But I still remember how beauty was found in some very unlovely places.
* 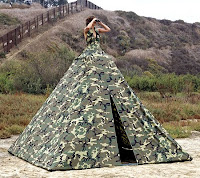