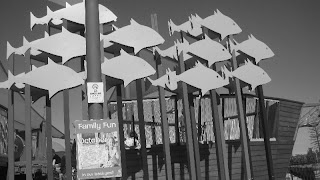 Written for  Weekend in Black and White

A pilot and a passenger were flying in a plane.
The aeroplane was twin-engined and the passenger was a pain.
He cursed and swore about the time of estimated arrival
And the pilot's thoughts about him became really adjectival.
Finally! Disaster! One of the engines failed;
It coughed and spluttered and then it died as high in the sky they sailed.
'More trouble!' growled the passenger; ' What are you going to do?'
Said the pilot 'We can fly on one engine almost as well as two.
The only problem that we'll have is the fact that we might be late.'
'Call yourself a pilot!' snarled the passenger; 'This is great!
Flying on one engine! Can't you do anything right?
If this one goes we're in trouble! We'll be up here half the night!'
*

Strange seeing so many fish in the air. I like your photo and your rhyme.