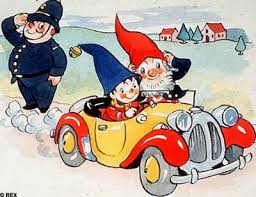 Big Ears and Noddy were great friends.
Enid Blyton's tale depends
On their spending time together.
But someone started wondering whether
They were gay! Such idle chatter!
And, honestly, it doesn't matter.
But rumours perpetuate themselves
And the books were taken off the shelves!
Look for problems and you will find them;
Sometimes nothing at all's behnd them
But I think it was rather shoddy
Casting aspersions on dear little Noddy.
In any case he's been reinstated.
Gay aversion is rather dated.
*
-------------------------------------------------------- 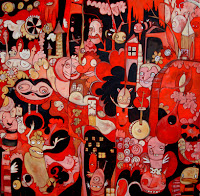 What an intriguing piece of work!
Was the artist 'seeing red'?
Bodies, expressions, googly eyes,
And every type of head.
The patches of black between the reds
Add menace the scene;
The whole thing would have seemed benign
If they'd been painted green.
Then we'd have seen a fairy tale
With hobgoblins and elves,
Sporting in some leafy glade
And enjoying themselves.
But, because the background's deepest black,
This seems a scene from Hell,
With souls in torment thrashing about
And not getting-on too well.
Some of them look quite cheerful,
Despite the mess they're in.
Ah well, I know there are some folk
Who like a little sin.
All in all a painting
That's filled with mystery.
I'm intrigued. I'd like to ask
'What is your history?'
*