ABC WEDNESDAY
http://abcwednesday-mrsnesbitt.blogspot.com
QUILT HISTORY
(The Rajah Quilt)
Just any old quilt? Oh dear, not so!
This relic from ages long ago,
Tells a tale of Convict times,
When women, regardless of their crimes,
Were herded together on dreadful ships,
With cries of anguish on their lips,
And sent away to the ends of the earth,
Far away from the land of their birth.
They were sent to Australia for ever and ever.
Would they see England again? No, never!
Some were villains, that's for sure,
But some were merely very poor;
They were guilty of stealing a crust,
And their imprisonment was unjust.
They  were sent, without hesitation,
To help to populate the nation.
Australia was full of lonely males,
Rioting, going off the rails,
And it was thought female company
Might add a little stability.
The women were jeered by the population
As they started to leave for their destination.
*

*
But there was a Quaker, Elizabeth Fry,
Who saw so much more than met the eye.
She saw women who seemed to have some potential.
And engaging them seemed. to her, essential.
One ship, 'The Rajah' was about to sail;
Elizabeth didn't just turn tail.
She went on board with needles and thread,
Coloured silks of blue and red,
Cloth to cut and ribbons to sew.
She knew the journey would be slow.
She urged the women to keep occupied.
And the ship sailed on the next high tide.
Sure enough the women stitched
Though the 'Rajah' tossed and pitched.
Day after day, week after week,
Though feeling desperate and weak,
The quilts were made for their new lives,
When most of them would live as wives.
Only one quilt remains, just one,
Though it is said some more were done.
And here's a wonderful P.S.
The women, wishing to express
Their gratitude, embroidered too
Their thanks to those to whom thanks was due.
*
-------------------------------------------------------------- 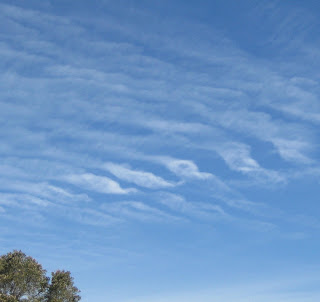 HERRINGBONE
A filleted sky!
Clouds streaming by
In order marching way up high!
Eddies of air
Way, way up there
Off to a parade somewhere.
*
Posted by Rinkly Rimes at 6:22 AM

That's an amazing story of the Rajah Quilt. How sad that only one remains, though.

A filleted sky....I love that!
The poem about the quilt is so interesting, sad but quite amazing at the same time.
Always enjoy coming here to learn new things.

Wonderful - as always. How wonderful to tell stories and what's essentially editorial comment be means of a quilt! Remarkable history!

The quilt story made me cry, Brenda. Of all the histories of all the countries in the former British Empire, the "settling" of Australia angers me most.
Although I love Kipling, I wonder at British injustice in India and other places. And I'm always grateful Canada was never as revolting as the USA.

That is a GREAT story! Uplifting though it started with injustice.

I must share this with my friend Kath.
Thanks so much Brenda.
Denise ABC Team

Thanks for the detailed story to go along with the wonderful quilt.

I'm always amazed at some of the stories behind those old quilts. Thank you.