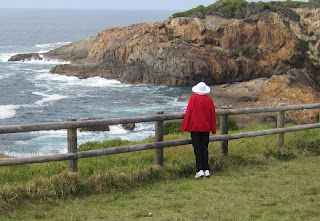 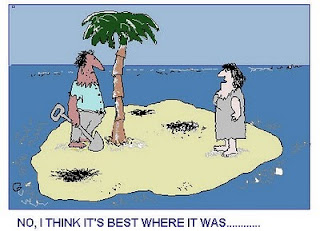 Gerald Gee
NO MAN IS AN ISLAND
I am a feminist through and through but I'm hopelessly impractical
So how do I accomplish things? Well it's often problematical.
First catch the husband off his guard, admitting work is needed,
Then pounce, suggesting time and place, to ensure your words are heeded.
The conversations go like this......' That bush is in the wrong place.'
'I'll move it sometime' (that is him, with a bored look on his face.)
Three days later 'I thought you said that bush should be over there?'
His response....'Did I say that?' Mine.....'Yes, I was there.'
Several days later I remark 'What a lovely sunny day!
The perfect day to move that bush!' (See how I get my way!)
'I don't think it needs moving!' Is this a rear-guard action?
'You said it did!' Oh dearie me! He's making a retraction!
'Oh for goodness sake!' He's rather peeved, but picking up a spade!
The bush is moved! The deed is done! The situation's saved!.
But look at the yellow island to see what happens next!
No wonder the poor old husband is looking a little vexed!
*
Posted by Rinkly Rimes at 7:31 AM

I cherish time alone.
And my husband never volunteers for anything, and never admits to anything. So nothing gets done.
— K

Lovely picture of time alone. I love looking at the ocean anytime.

the view there is so gorgeous, I don't mind being all alone to enjoy them!

Is that a photo of you alone, contemplating the sea?

Whenas in red my Julia’s clad,
Then, then (methinks) she’s wicked bad—
Like Hester Prynne, but not so sad.

Next, when I cast mine eyes and see
Those crimson skirts flow full and free,
Her sweet seductions taketh me!

The graceful sense wraps your artworks.

Thank you World-wide love and, encouragement.

The traditional kimono children, it is celebrated growth.

The prayer for all peace.
I wish You all the best.

Have a good day.
Greetings.
From Japan, ruma ❀

Visiting a bit late for Ruby Tuesday! Hope you can visit me too:)