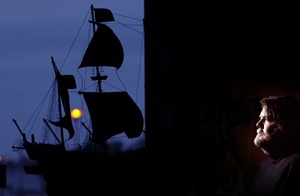 From the local paper


MARITIME MYSTERIES
Night-time tours of the harbour are planned for the coming season.
Newcastle's Maritime History is, of course, the reason.
Tours will have a ghostly flavour recognising all the wrecks;
Ships which found the ocean washing over their decks.
Over two hundred vessels are buried beneath the sea;
Their stories are great drama though there's nothing we can see.
The tours will be made in  little boats, when the moon is shining bright,
And tales of submerged mariners will be told at dead of night.
Little did those sailors think, when they sailed so long ago,
That their terrible personal tragedies would become a tourist show!
*
Posted by Rinkly Rimes at 6:47 AM