Not me!
FREE WRITE FRIDAY
http://magicinthebackyard.wordpress.com
asks us to write a letter to our thirteen-year-old selves
DEAR THIRTEEN
(A letter to my young self)
No photograph of you remains;
It was a time of War.
And armaments and maps and things
Were what photographs were for.
But I recall you distinctly;
I see your face quite clearly.
Though, maybe, not quite well enough,
For I am seeing, merely,
A double chin and glasses
And a rather podgy figure,
With a sprouting bust that was rather large
(And destined to grow bigger!)
I know you'd look in the mirror
With a sense of utter despair,
As you saw this sorry creature,
With the thin and mousy hair.
I tell it as I felt it,
Not because anyone said
That I was an utterly hopeless case;
It was just inside my head.
I write to you now to say 'Cheer up!
It will all turn-out all right!
Smile at everyone you meet
And simply hold on tight!
You're not Elizabeth Taylor,
She of the lash-fringed eyes,
And you wont be a dazzler,
Or win any beauty prize.
But one day you'll be eighty,
A grandmother and a wife,
Not much worse-looking than the others
And having a wonderful life.
Some things were disasters,
There was no money or fame,
And your life might appear, to others,
As rather dull and tame.
But, my goodness, it was better
Than anything you could have hoped for.
If you and I could chat a while
You'd wonder what you moped for.'
*
---------------------------------------------------------------------------------------------------- 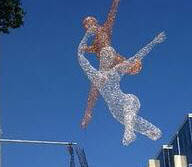 DANCE DE LUXE!
Two lovers dancing in the sky
Pirouetting as they  pass by.
Turning, weaving against the blue.
What a glorious way to woo!
He is gold and he flies higher
Above the object of his desire.
She is silver, she moves below,
Spinning, curving, soft and slow.
Borne on the breeze they hang suspended
Would that their dance would not be ended.
But alas! In time, they'll fall and settle
Proving they're only made of metal.
Filigree metal, light as air,
Entrancing us as they're hanging there.
*
Posted by Rinkly Rimes at 9:38 AM

Oh, Brenda, if it wasn't one thing, it was another. I was little and scrawny with no bust at all, and so depressed I thought I'd be better off gone. A year later I felt much better about myself, although not about my bust, which never did grow until the medication in my 40s made my whole body swell up like a balloon.

Marvelous! very well written - I loved this line "That I was an utterly hopeless case;
It was just inside my head." Reminds me of me at that age too! Peace and blessings, Terri

I know you'd look in the mirror

With a sense of utter despair,

As you saw this sorry creature,

thanks for the contribution to FWF!!!
hugs!

What a great piece...I can see myself in it. I was such an ugly duckling. I am not a swan, but hey I improved...lol

oh, yea! - another well-endowed, early bloomer in the crowd ;) The hopeless case message was only inside my head, too.

My favorite part was the ending:

But, my goodness, it was better
Than anything you could have hoped for.
If you and I could chat a while
You'd wonder what you moped for.